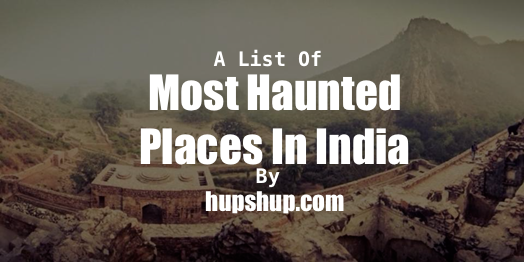 A place that has beautiful forts, palaces and also a deserted area originates the history of many king’s reigns in India and how they were forced to evacuate those beautiful palaces. Rajasthan, not only has the beautiful forts but it is also a home for many ghosts. If you have the nerve, go visit these sites but before that scroll down to know more about the places where ghosts reside.

The only ‘legally haunted’ place in India where no one is allowed after sunset. Bhangarh is India’s most haunted place. The ‘ghost town’ is located between Alwar and Jaipur in Rajasthan.

India is a country of stories, be it folk tales or scary stories, we have millions of them to share. One such story is of Bhangarh fort, the ruined yet beautiful fort which is also a home for many spirits and ghosts.

One of the stories about Bhangarh Fort suggests that the fort was cursed by Guru Balu Nath, a magician. It is said that he cursed for the town’s evacuation and threatened that the day anybody builds a building taller than his palace or even if a shadow of a palace touches him, the town shall perish. Ajab Singh, grandson of Madho Singh, ignored his warning and constructed a fort taller than Guru Balu Nath’s palace and let to the destruction of the town.

Another version of stories suggests that Singhia, who had black magic powers fell in love with the princess of the village, Ratnavati. Since there was no other way to have her, he used his black magic powers and one day he replaced her scent with a potion to make her fall in love with him. Ratnavati discovered the wizard’s intention and threw away the potion on a nearby stone. As a result, the stone rolled and crushed the wizard. While dying, Singhia cursed the palace with the death of all who dwelt on it and the very next year there was a battle between Bhangarh and Ajabgarh where Ratnavati died.

The Bhangarh haunting stories are famous worldwide but most people are not aware of that during the daytime Bhangarh is a holy place and there is a temple at the starting point of the fort where many people come to worship but during night the same place haunts and kills anybody who tries to stay there after sunset.