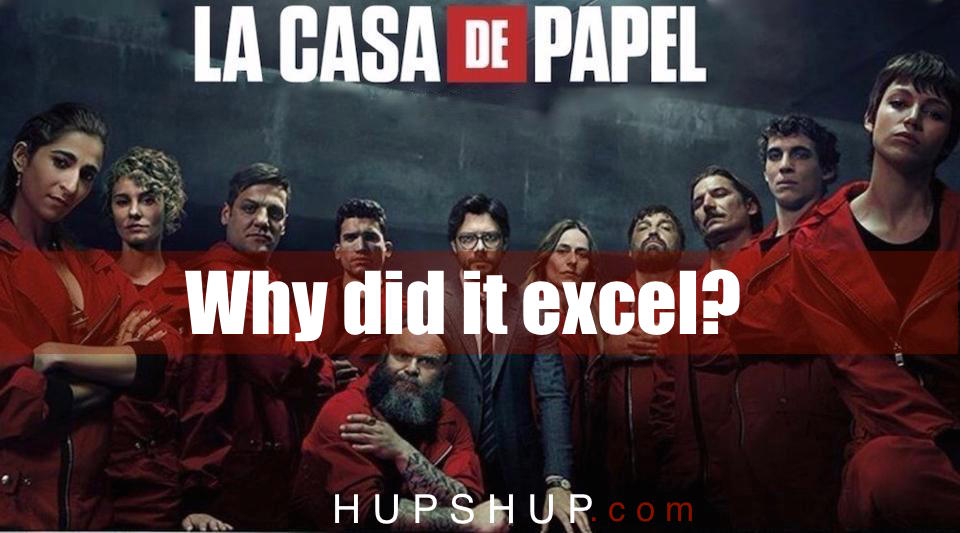 Money heist excelled on Netflix even when the show originally failed – It was originally aired locally On a Spanish TV channel in 2017, where at first it did well, and a half million viewers, BUT, the hype started to fade, views went down constantly and with the decline, the show died. I’ll be talking about how the show excelled.

The show reached a deadend but Netflix was waiting at the end. Netflix bought the show and put it on the international catalog, and at the time no one was psyched by that and the series was launched with No Advertisement, just there in the catalog.

Then something started happening, the cast started getting a lot of social media attraction. Their accounts were bombarded with followers, That sure blew their minds.

The show had made it to position 2 in the list of worldwide most popular tv shows competing against all tv shows in history, of course, everyone started talking about it.

What’s fascinating is the red jumpsuits and the mask started being used in America, Europe, and Asia in civil rights protests, and the theme song Bella ciao has been used in various causes be it freedom, feminism or environment.

The theme song Bella Caio- the song which was originally used in the anti-fascist moment in Italy. Is now being played globally everywhere in the world

And that’s when they were asked to work up another heist and it gave birth to Part 3, Well, of course, this much popularity translates into data. Today, Money Heist a Netflix Production is the most viewed in the history of FRANCE, ITALY, ARGENTINA, CHILE, BRAZIL, and PORTUGAL. And in general, it is among the most viewed in all the countries in the world so it won’t be wrong to st=ay that it had an impact on the entire world.

It was because of the audience, the bond people have with the show beyond pure entertainment,  it is more of a philosophical bond.

Let’s come to the important stuff shall we?

What was it that made money heist excel so much?

Passionate love stories – We all love some heart in a show. Why does action has to be hollow. La casa de Papel is a combination of action with love stories or love stories with action.

Unpredictable –  It offers a combination of clichés along with a lot of unpredictable plot twists. I mean look ant the professor – Can you imagine a mastermind of a heist to be like that. And that is what brings me to my next point. Every character is tied up to a very thin thread, you’ll be seeing so many characters die.

The professor –  A regular man who people will relate was shown to be able to achieve so much and at the same time be so naïve at tons of things. This makes the audience feel connected with the character.

I mean look at berlin, his character from the beginning had mystery, he was even despicable sometimes. But other times, classy and admirable. That’s what makes it so unique that a character with such negative energy and be so loved. He was always the top 3 most loved characters.

My analogy is that his character shows dominance, authority, and leadership which the viewers might find repulsive but it gives a feeling of safety and security.

Bella Caio – The theme song Bella ciao- the song which was originally  used in the anti-fascist moment in Italy. Is now being played globally everywhere in the world. They connected with the resistance, which was appealing. You’ll begin to love the song when you watch this show.

Well, are you fighting a resistance? – All you need is a red jumpsuit, a mask and Bella ciao playing in the background.

The director, the cast and the entire crew has put in so much work and has made something so spectacular. La casa de Papel has made history.