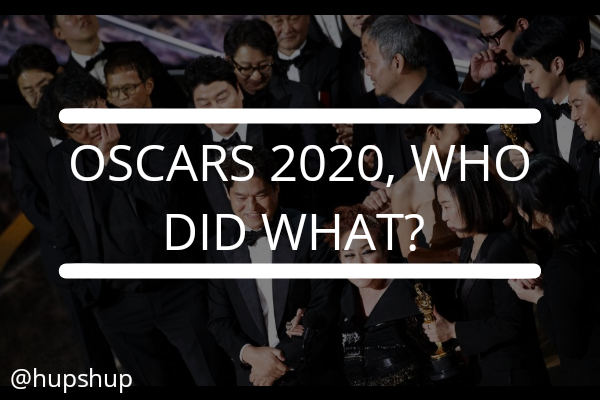 The 92nd Academy Awards ceremony took place at Dolby Theatre in Hollywood, Los Angeles, California on 10th February, Monday honouring and celebrating the best films of 2019.This year, Parasite, a 2019 South Korean dark comedy thriller film directed by Bong Joon-Ho, who also co-wrote the screenplay with Han Jin won, won major awards ( Directing, Best International Feature Film, Best Original Screenplay and Best Motion Picture) and became the first non English film in 92-year history of the Academy Awards to take the top prize. Other movies which bagged the most Academy Awards were 1917, Ford Vs Ferrari, Joker and Once Upon a Time in Hollywood.

Although 1917 lost the best picture but bagged most of the craft awards including best cinematography, sound mixing and visual effects. Despite being shot with such dedication it does not rely on it’s biggest strength but offers you a story of survival. With 11 nominations, Joker became the most nominated picture of 2020. Joker took home best original score award.

Actor Joaquin Phoenix was awarded an Oscar in the category of leading role for his performance in and as Joker, a failed comedian mistreated by society and his downwards spiral of crime in the Gotham City.
Renée Zellweger is the Oscars 2020 winner for Actress in a Leading Role for her performance as Judy Garland in JUDY! This was her second Oscar win. Brad Pitt won in the criteria of actor in supporting role for Once Upon a Time in Hollywood and Laura Dern in actress in supporting role for Marriage Story.

This year’s Oscar was full of surprises and beautiful moments. From Bong Joon-ho honouring Martin Scorsese and his fellow nominees to Eminem’s surprise performance of Lose Yourself. Brad Pitt got political with his speech and Joaquin Phoenix remembered his brother and shed light upon the problems such as animal cruelty.
This year’s Oscars was controversial, phenomenal, celebrated Diversity and it was delightful to watch an international Film winning the top awards.