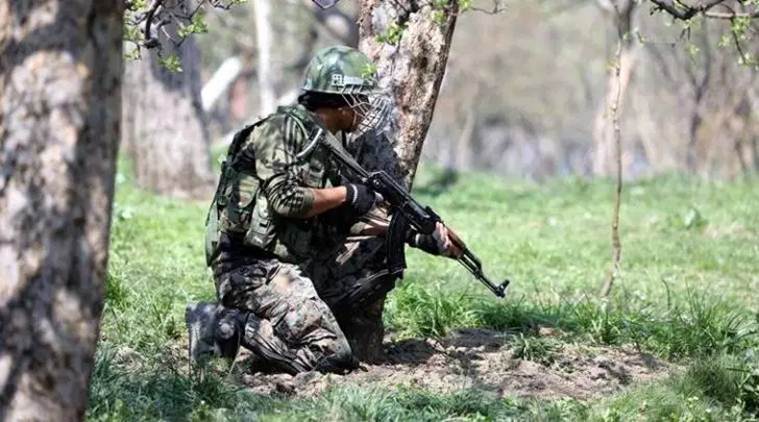 Ajay Pandita, a village chief in Jammu and Kashmir, was shot dead by suspected militants in Anantnag district on 8 June, 2020. His father had reported that he heard gunshots at 5 in the evening, and ran to see his son covered in a pool of blood. He remembered that he had heard his daughter screaming in shock, after which he ran out to see his son’s chest and left shoulder been ripped out by bullets.
The father of two daughters, Ajay, was rushed to the district hospital in Anantnag, some 18 kilometers away from Lukhbawan, where doctors declared him dead.

No militant group had claimed responsibility for murdering Pandita at the time this report was published. J&K Police Chief Dilbagh Singh said it was a “targeted killing” carried out by the Hizbul Mujahideen, a militant organisation formed in 1990 with the goal of merging Kashmir with Pakistan. Kashmir has been battling with militancy and the utmost violence between the Army and the militancy groups for decades now.

In conflict-ridden Kashmir, those who engage with the Indian state — party workers, village chiefs and policemen — are hunted by Pro-Pakistan militants and Pro-Independence and often have strained relations with their fellow Kashmiris.
Pandita is the second village chief killed by militants since August, last year, when the Narendra Modi government revoked Jammu and Kashmir’s special status and demoted India’s only Muslim majority state to a Union Territory. It has been reported that often village chiefs take homage in Srinagar and stay in safe houses for days if there’s any threat detected.

HISTORY of the PANCHAYAT

Kashmir witnessed an exodus of Pandit families after Muslim militants carried out a campaign of assassinations and torture against them in the early 1990s. According to a report, 399 pandits were killed in the mass killing incident, much more than the official death toll number that stands at 219. According to another report, prior to the 1990 exodus, there were around 3,25,000 people (Pandits), but now there are only  2,867 people (Pandits) left.

Pandita’s family had also moved to Jammu for safety but returned in 1996 when he joined The Congress Party. After two years of return, Pandita contested the Urban Local Bodies polls as a Congress Party candidate and was elected the sarpanch of three villages, Lukhbhawan, Lirkipora and Mugalpora of Doru constituency, in Anantnag.

In the build-up to the 2018 Panchayat elections, National Conference (NC) and People’s Democratic Party (PDP) announced they would boycott the local elections, expecting Modi Government was planning to abrogate Section 370 which actually happened in 2019. Around 12 panchayat houses were set on fire before the elections.

According to reports, seven sarpanches and panches have been killed ever since 43,000 grassroots level representatives were elected in the 2011 polls. In a press conference on 9th of June 2020, Anil Sharma, president of the Jammu & Kashmir Panchayat Conference said that 18 village chiefs had been killed in attacks staged by militants, but he did not say since when.

Moreover, in September 2019, the Union Home Minister Amit Shah had assured the panchayat members of Jammu and Kashmir that the government would provide Rs 2 lakh insurance cover to each and every panch and sarpanch in the Union Territory (UT). The assurance was given against the backdrop of the killings of panchayat members in the Kashmir Valley by militants.

However, there has been no progress in that aspect and it has been proved to be a “mere announcement”. Even the Rural Development and Panchayati Raj Department, which is the nodal department that deals with panchayat members, is unaware of any such proposal or progress made in this regard.

“He was helpful to all. He loved his roots and always extended a helping hand to the needy. After becoming sarpanch he had decided to work for the welfare of Muslim villagers”, Vijay Pandit, brother of Ajay Pandita

All Parties Migrant Coordination Committee (APMCC) leader Vinod Pandit accused the government of playing with the lives of minorities and demanded a probe into the killing.
Since April this year, posters purportedly pasted by militants of the Lashkar-e-Toiba and the Hizbul Mujahideen have come up in south and north Kashmir asking Sarpanches and Panches to resign publicly from their posts.

The events that FOLLOWED

The killing of a sarpanch by unknown gunmen earlier this week has sparked a series of resignations by grassroots level public representatives in north Kashmir, taking the number of those who resigned since the 2011 polls beyond 350. Following Pandita’s death, 3 Sarpanches and 12 Panches have resigned so far.

Candidates claim the government had made big promises to them, including giving them sweeping powers and also ensuring their safety, but were left to fend for themselves after the polls were over.

“We appeal to these gunmen to stop such killings of innocent and unarmed civilians. We also want to clear that we do not represent any political party as the elections were held on the non-party basis. We are there just for development,” said Sultan, a Sarpanch from central Kashmir’s Chadoora area.

These representatives have been demanding security in the wake of the spate of attacks. The government, however, has not responded in any way, or have addressed the killing which has shocked Kashmir’s people who have been hoping for development and hope.
The minorities of any region, I believe, should be protected beyond government’s reservations. The investigation continues, more to follow.