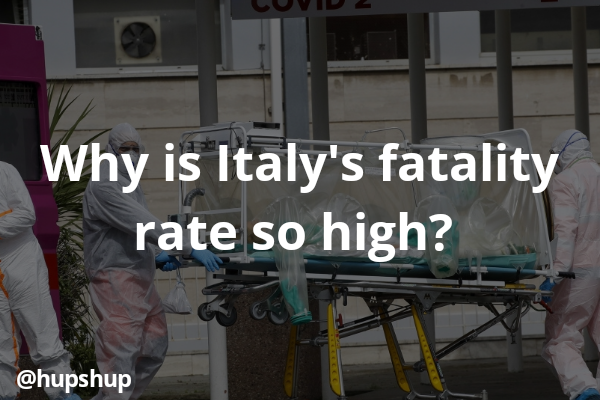 The article was published on 3rd April 2020 and the stats might have changed, to view the recent figures, visit http://hupshup.com/covid-live-tracker/

119,827 cases of Coronavirus have come up in Italy till now and the country has seen 14,681 deaths of its citizens till now. The country has become an epicenter of the pandemic and the numbers are expected to even rise higher. The country has been covered and infected with a doomsday kind of situation.

Even after nationwide lockdown and suspension of all non-essential businesses, Italy has not been able to flatten the curve of the infection, and to calm and settle the already exhausted resources of medical care of the country. The country is now seeing 12.25% fatality rate (12.25% of the total infected people have died due to the virus), and is only one with a rate like this. Extreme measures by both government and medical institutions have not yet been able to dismantle the infection. In neighboring Germany, the same virus led to fatality rates of just 1%. In China, it was 4%, while Israel had the lowest rate worldwide, at 0.35%.

China, where the virus had originated has surprisingly shown tremendous recovery and outstanding report on handling the disease, and all conspiracies aside, maybe the China has done something very brilliant which no other country has come to replicate.
Wuhan, which was sealed off since January 23 to contain the epidemic, was scrutinized diligently and the testing was done for even the smallest display of symptoms. Wuhan, after its three weak lockdown is expected to be eased of some limitation on movement starting from April 8 2020.

Now why, Italy which is #2 on Worldwide Healthcare Ranking and was evidently a developed nation has seen such a high fatality rate?

To understand this, you first need to know the census of the country: n 2020, 23.1 percent of the total population in Italy was estimated to be aged 65 years and older. According to data, the share of elderly people in the Italian society grew constantly. On the other hand, the share of people aged upto 14 years have experienced a decrease in the last years due to low fertility rates. Coronavirus, as we know has been devastatingly unkind to the elderly and people who have low immunity and resistance for external infections, which already left Italy at risk. In Italy, 85.6 percent of those who have died were over 70, according to the National Institute of Health’s (ISS) latest report.

A part of the major cause of the spread is also held against the authorities and govt of Italy for not reacting timely to the rise of pandemic in the country.
As per reports, as the emergency situation rapidly deteriorated over the past month, Italy focused its testing only on people showing severe symptoms in areas with high epidemic intensity – the result, experts say, is that the currently available numbers produce a statistical artifact, a distortion.

“This causes an increase in the fatality rate because it is based on the most severe cases and not on the totality of those infected,” said Massimo Galli, head of the infectious disease unit at Sacco Hospital in Milan, the main city in the worst-hit region of Lombardy where 68 percent of the total national fatalities have been reported.

“Other countries should watch closely,” said Pierluigi Lopalco, epidemiologist and professor of hygiene at the University of Pisa.
“Citing the epidemic curve of other countries, Lopalco suggested that the difference between them and Italy is timing: they are simply at an earlier stage”, he added.