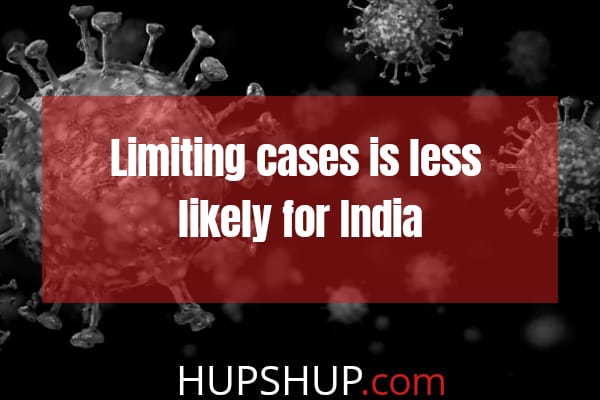 India’s trajectory in COVID-19 cases is following the United States and likely to similarly reach a trajectory rather than peak soon as is said by one of China’s top infectious disease expert.

India likely to follow US trajectory, as India had already shown signs of community transmission, the likelihood of India following the European and US trend was quite high rather than limit cases to a low number, said Zhang Wenhong, a leading figure in China’s COVID-19 strategy, who is also director of Huashan Hospital s Department of Infectious Disease in Shanghai.

“I think the overall situation in India may be similar to that of the U.S,” he said. “The measures of each state in the U.S. are different. Some states are strict and some have resumed work.

India has to consider how the economy functions and how the epidemic can be controlled, so it does not pay a high price for epidemic prevention. The economy had already taken a massive hit and this pandemic has only taken it further. Keeping a complete lockdown might not be a viable option for the country.

He said in this view, India’s approach to adopting a long-term strategy made sense, including its approach to testing. While India’s approach to tackle COVID-19 has been different from China’s sweeping lockdowns and mass quarantines, India’s strategy was understandable for its national conditions. “Every country should find a way that suits them according to their situation,” he said.

He suggested China’s “100%” lockdown, or Australia’s approach of locking down until very low numbers of new cases were reached, was unlikely to be replicated in other countries and added that he did not necessarily advocate a one-size-fits-all approach.

“I personally feel that India does not need to adopt such a strategy,” he said. “I think their government would probably follow the U.S. strategy”.

India may not be able to keep cases to as low a level as did many places in China — which managed to limit the spread outside of the Hubei province epicentre with mass lockdowns, quarantines and testing — but at the same time, the rise in cases did not mean the spread was uncontrollable.

“Do not look only at the number of cases,” he said. “There have been hundreds of thousands of cases in the U.S. and Europe, more than in India. The lives of Europeans still has not stopped, and they are preparing to resume work, school and business.”

Dr. Zhang made the comments on Wednesday while interacting with Chinese nationals in India in an online exchange arranged by the Chinese Embassy, and fielding questions on India’s strategy, testing and the future trajectory of cases.

He believed the global pandemic was broadly under control, and as the number of diagnosed cases increased, the mortality rate would further reduce. This outbreak, he said, was very different from SARS in 2003, which had a far higher mortality among both young and old. This also explained why some countries were choosing to reopen their economies and schools.

On the question of whether Indians had a higher immunity than the rest of the world — a matter that has been widely debated in China — Dr. Zhang said the incidence rate in India suggested this was not the case. He said he was, however, moved to see how “calm” people were in handling the pandemic, which suggested what they did have was a high “spiritual immunity”.