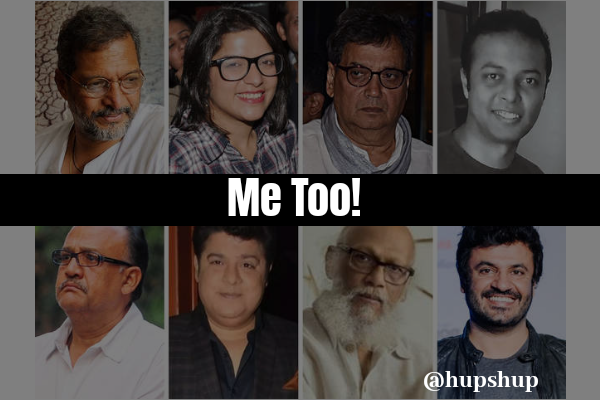 It’s been an year since the #MeToo movement came to India and erupted. ‘Me Too’ movement was founded in 2006 by Tarana Burke to help survivors of sexual violence, particularly young women of colour from low wealth communities, find pathways to healing. The movement became an internet sensation when actress Alyssa Milano stumbled upon this phrase and tweeted this.

The movement spread like a wildfire on the internet and crossed borders, reached places like France, China, Kenya and eventually came to India.
Indian women however had raised their voices against sexual assault since a very long time but they got the recognition they required after this movement. The movement caught many eyes and was very controversial because of the names involved in the accusations. Actors like Nana Patekar, Alok Nath, directors like Sajid Khan and Vikas Bhal, politician M J Akbar, comedian Utsav Chakraborty, author Chetan Bhagat and founding editor of ‘The Wire’ Sidharth Bhatia among with many others were accused of inappropriate behavior and sexual harassment.
But sexual assault or harassment is not only limited to corporate or news rooms or film industry but in public transports, classrooms, home and beyond.

Although #MeToo movement should not remain restricted to the middle class and the upper class women, to women in cities or women who are English speaking, but should include women of all race, of lower caste and creed, women with disabilities, women belonging to LGBTQ+ community, women of Jammu and Kashmir, women of religious minorities. Feminism is about equality for everyone and we can do that by including more and more people from different socio – economic background.