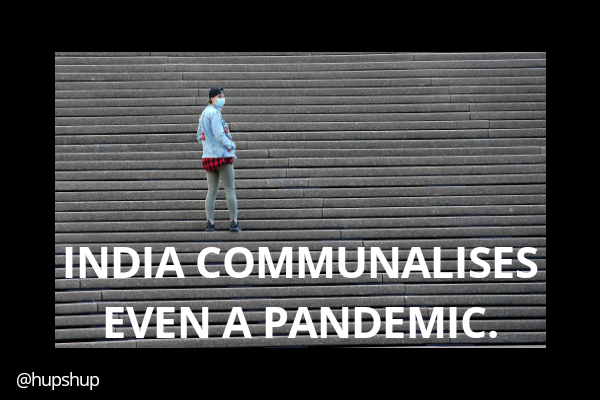 Today, we are on the verge of having approximately 6000 positive cases of COVID-19 in India. The government and officials are trying their best to take measures in order to deal with it. The state is almost in a situation of National Health Emergency, and it is very clear that everyone is affected by
this Pandemic. People are suffering due to the disease, and also because of
the strict, though necessary, actions were taken by the central and state
governments in all states and UTs. India is likely to face a huge loss in terms of Public Health, Governmental Management, and Economy if we fail to control the chances of community transmission of the disease; and to deal with it, there are doctors, nurses, paramedical staff, and government officials working day and night in order to serve the nation. In such a time of alarming situation, there is another disease that captures the immune system of most Indians right now. Communalism.

There have been cases of communal riots all across India, especially in different areas of NCR before the cases of COVID-19 would spread much, and even now, the reservations and prejudices in the minds of people are taking the basic idea of the structure of India altogether to a dangerous place.

Xenophobia, Islamophobia, Castism, and Racism have always been some constant evils in India, but now, these diseases seem to have gotten a better capture on the minds of their hosts. There have been reported cases of violence against citizens of North-East India and other residents of India of Mongolian ethnicity, due to the popular allegation of COVID-19 as “Chinese Virus”. Even Doctors, paramedical staff all across India have complained about being judged and mistreated because of their ethnicity and prejudices of people. The term has even been used by many global leaders including the President of the United States of America, Donald Trump. This has alleviated a sense of insecurity and is now affecting the mindsets of people all across the globe.

Besides that, if we talk about the constant ‘Hindu-Muslim’ rivalry in our own country, the recent case of Tablighi Jamaat has added fuel to the already heated up relationship between the two communities. There was a jump in the number of positive cases of COVID-19 after the annual two-day convention of the Muslim sect, ‘Tablighi Jamaat’, on 13 March 2020 was reported for which, about 3,500 people gathered from all over the country and abroad in the South Delhi neighborhood of Nizamuddin in the National Capital. Almost 2,000 stayed in the area for days afterward, and the area has now become the coronavirus hotspot of India. The outbreak from the Nizamuddin mosque gathering also inflamed religious tensions in the city which are still reeling from communal riots that took place in the North East region last month that took more than 50 lives, with Hindu mobs rampaging through the streets attacking Muslims in their homes.

Meanwhile, social media is flooded with popular memes and hashtags which demean the entire community, some of them being #coronajihad, #atanki_tablighi_jamaat, #human_bombs, infiltrators, etc. Recently, I came across a meme which said,

What shook me was that the person sharing this is an old friend who comes from well-educated, upper-class family background. Similar posts and media have been shared by popular personalities and influencers all over social media including Facebook, Instagram, Twitter, and even TikTok. There has been the delivery of hate speeches on news channels and internet against the entire school of the religion, circulation of which, has heightened the level of hatred among people against the community, fuelling the miseries of many people who practice Islam.

On being asked about the reason to have so much hate against a particular sect of people, many Hindus have admitted,

“they are against because the religion promotes murder and exploitation of people in order to spread Islam.” Some even said that, “they’re not blaming all Muslims for being responsible for the increase in the number of positive cases of Coronavirus in the state, but this incident has convinced them to have reservations against the entire ideology of Islam and the cruelty the religion holds”.

The sad part is that people from good educational backgrounds are also
participating in the sharing of such posts, which is definitely becoming a stronger medium to affect people with communalism, than it would with Coronavirus. In a state like ours, where the ideologies of religion are considered above science and belief is practiced more than practicality, the spread of such messages would only fuel intolerance and bigotry.
To have reservations against a religion directly affects the lives of the people who practice it, and these statements left me in a state of shock and amusement at the same time. Being a Hindu, I know about all the cruel and unjust practices conducted and even promoted by many who follow it, which include thoughts and suggestions which encourage casteism, sexism, biases due to karma, animal sacrifices, etc.

The ancient unjust thoughts from scriptures of the Vedas, Manusmriti, and Chankyaneeti, which promote caste-based cruelty and suppression of women, which have been criticized by many global leaders are still used to impose orthodox practices in the name of religion, but most of us would agree that these thoughts are old, and now need to be reformed. In fact, they have already been given up by most of the Hindu practitioners.
Sati even was once considered an important custom of the religion (Hindutva), which was very much required to be eliminated from society to help the suffering of women back in those times.

An initiative by leaders of the early 19th century including Raja Rammohan Roy and Sahjanand Swami, which faced a lot of criticism and opposition by the preachers of those times, took over 200 years to be considered as a sinister and inhumane act of brutality against women.

But as I said, being an individual who follows Hindutva, I know that my religion is more than those thoughts of paradoxical beliefs and practices, and it promotes faith, peace, and harmony more than any sort of injustice. The point that I am trying to make here is that no matter how prejudiced and orthodox some sects of religion be, to blame and criticize the entire community because of them is unjust, and would only spread hatred and tension among citizens. In no way, do I justify or favor the uncooperative actions by the people who were responsible for the community transmission of the deadly virus in the country and their heinous acts of hurting and beating doctors and policemen. I also condemn their act of not taking the alarms and announcements made by the WHO and the governments seriously, risking lives of people across the country and worldwide, but, I also think that to blame the schools of Islam and the entire religion for the Tablighi Jamaat incident, is as similar as blaming India to be the rape capital of the world, or Syria and Iraq to be the terrorist hub on earth. We all know that the above two examples although very
much in use, are not true and unjust and have often resulted in oppression and abuse of the citizens of these countries across the globe.

It is high time that people realize that in times of such global emergency, distribution and division of people will only make the situation worse than it ever was.

We need to keep humanity above our personal reservations against each-other and need to join hands in order to save mankind. The World is already in war with the Novel Coronavirus and we do not need to create a situation of civil war on the top of it.
People are dying across the globe, and there are other people who are risking their lives to save the world. If we cannot help them, let us not create another issue of tension for them. Let us be more responsible about our duties and rights, and be more humane, to all humans. In a situation where mankind is facing a global crisis, we cannot let communal and religious differences take a toll on our minds. People are risking their lives to save ours. Doctors are practicing their religion to save lives; officials are doing their duties to provide us with our basic necessities. To divide the spirits of people during such times would only cause damage.

It is high time that we realize, that the Mongolian race did not spread the Coronavirus.

Islam is not synonymous to evil.

Hinduism does not promote intolerance.

India is not the Rape capital of the World.

The states of Iraq, Iran and Syria, are not all about terrorism.

The Tablighi Jamaat, does not represent the entire Muslim Community.

We are all in this together! 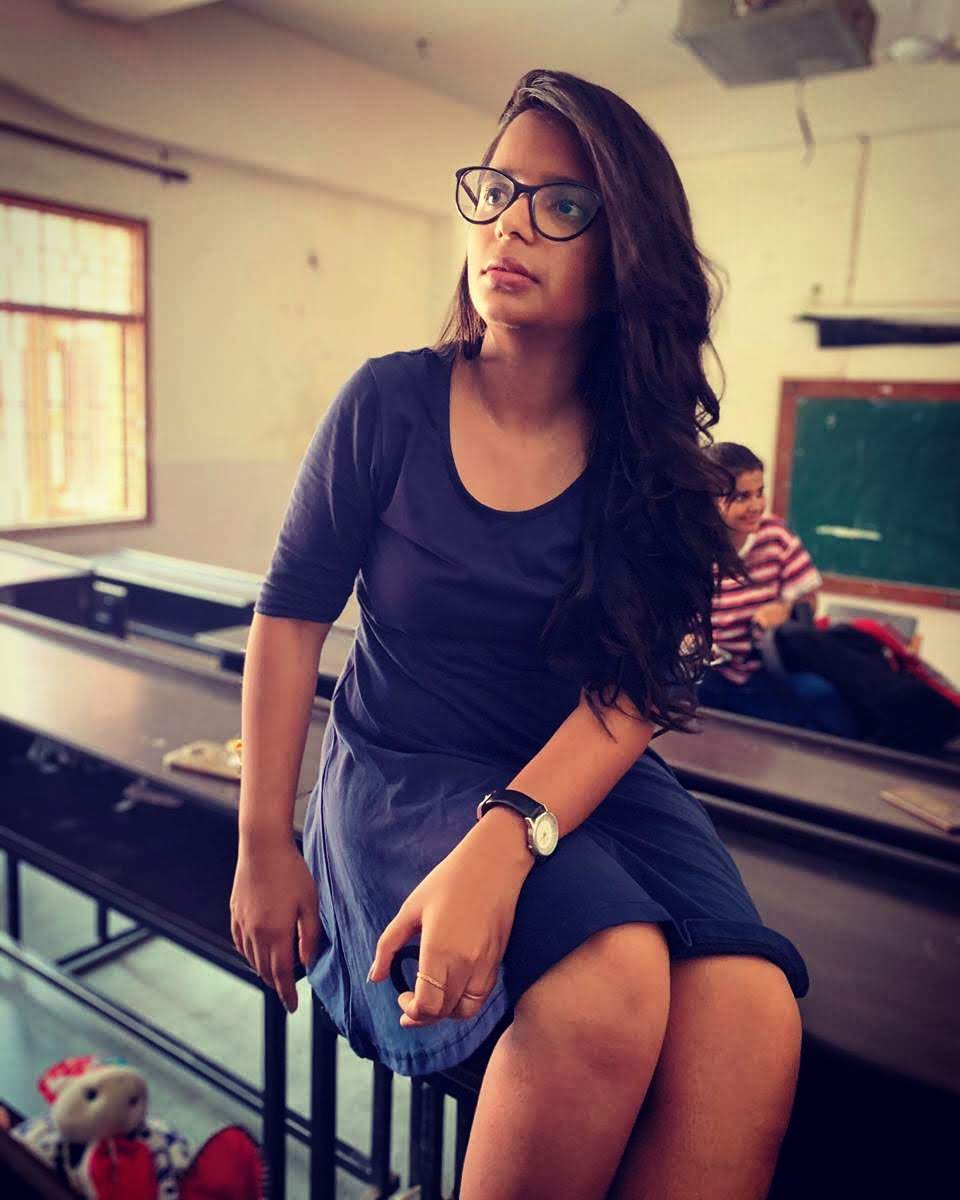 I am a person who loves to learn and grow. Curiosity and experiments with creativity are the two traits that I can say define me, and I always keep looking for opportunities which let me learn new skills, and enhance the ones that I already possess. When intrigued by a topic, I try to educate myself more about it.