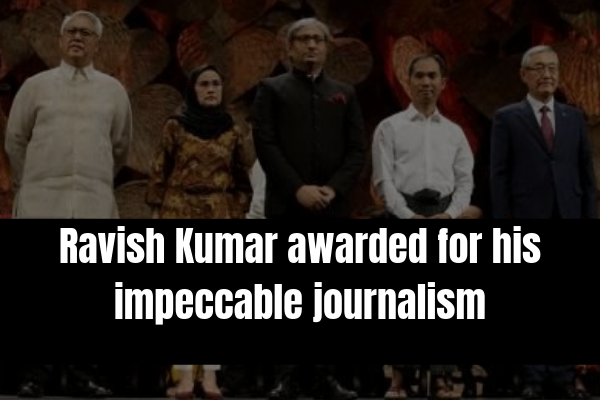 “Sometimes resistance is not a matter of choice. Not all battles are fought for victory – some are fought to tell the world that someone was there on the battlefield,” said Ravish Kumar while receiving Ramon Magsaysay Award on September 9, 2019, in Manila, Philippines.
Born in Jitwarpur village in Bihar, graduated from the Deshbandhu College University of Delhi and pursued a post-graduate diploma in Hindi Journalism from the Indian Institute of Mass Communication. He started as a reporter in NDTV and gained recognition for his shows like Prime Time and Ravish ki Report.

Ravish Kumar, NDTV India’s senior executive editor and one of India’s most influential TV journalists who has been reporting real-life and under-reported problems of ordinary people, said the award citation by the Ramon Magsaysay Award Foundation.

In his speech, Ravish Kumar raises concern towards the functionality of Indian media and how it is killing our democratic instinct. The transformation of Indian media from telling the news to explaining the news and its implication on our lives to making and selling the news. The propaganda and fake news are diverting the attention of citizens from important issues. The free voices on the internet are often silenced by the trolls and the right-wing IT cell. Ravish Kumar has received death threats on twitter and to our surprise *sarcasm* some of these accounts were even followed by our Prime Minister, Shree Narendra Modi.
Asking questions and criticising government has become a crime nowadays and people who believe in dissent are called anti-nationals.
Ravish Kumar is the author of the book ‘The Free Voice – On Democracy, Culture and The Nation’ which highlights how free expression and individual liberty is under serious threat. In crucial times like this, personalities like Ravish Kumar are a necessity to keep our democracy intact. Giving voice to minority, rural communities and raising important questions, we salute the spirit of Ravish Kumar.