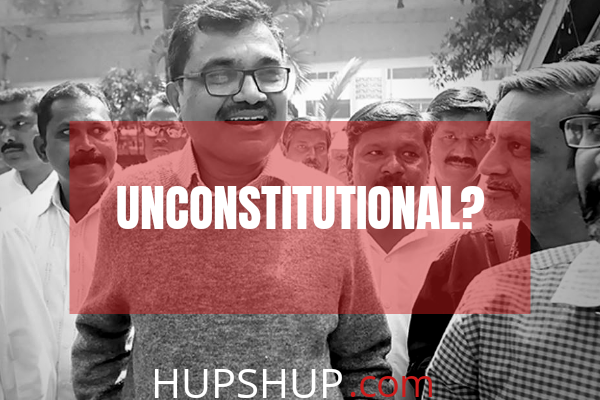 “The jingoist nation and nationalism have got weaponised by the political class to destroy dissent and polarise people. The mass frenzy has accomplished complete de-rationalisation and inversion of meanings where destroyers of the nation become desh bhakts and selfless servers of the people become deshdrohis. As I see my India being ruined, it is with a feeble hope that I write to you at such a grim moment.” wrote Anand Teltumbde in an open letter he wrote on 13th April 2020, the eve of his arrest.

Who was Anand Teltumbde and what was his crime?

On 29 August 2018, his home in Goa was raided by Police and was accused of being a prime suspect in the Bhima-Koregaon case because of a speech he gave just before a day of the Koregaon clash. According to the police, ” Tembulgende’s ‘inflammatory’ and ‘provocative’ speech made at the Elgar Parishad held just one day before triggered the Koregaon violence where one innocent life was lost.” He was also accused of having close connection with the Maoist Party and having made a plan to assassinate Prime Minister Narendra Modi, which he has completely rubbished. His lawyers, Kapil Sibal and Abhishek Manu Singhvi (also senior Congress leaders) argued that no concrete evidence has been found against them to support the accusation.
His repeated pleas asking for bails have been rejected time and again, and on 16 March 2020, Supreme Court gave Anand Teltumbde and fellow activist Gautam Navlakha were given three weeks to surrender. On 8th April, they were asked to surrender on 14th of April 2020.

What is the Bhima-Koregaon case?

The 1818 Battle of Koregaon is of importance for Dalits. On 1 January 1818, 800 troops of the British Army, with Large number of Mahars (leather workers) predominant among them, defeated a numerically superior force of the Peshwa Baji Rao. The 2018 Bhima Koregaon violence refers to attack on visitors during an annual celebratory gathering at Bhima Koregaon to mark the 200th year of the victory. This incidence led to a fight and  violent clashes between Dalit and Maratha groups. One person, identified as 28-year-old Rahul Fatangale from Nanded, was killed and many others were injured.

The police alleged that the Elgar Parishad meeting that was held on December 31, 2017, is to blamed and accused it of conducting inflammatory. Those arrested on August 28, 2019, included writer and poet Varavara Rao, lawyer and activist Sudha Bhardwaj, academic and activist Vernon Gonsalves, and human rights activists Arun Ferreira and Gautam Navlakha.
All these activists – who have a history of speaking out for the marginalised Dalit and tribal communities. They have been charged under the Unlawful Activities (Prevention) Act, which makes it virtually impossible to obtain bail. The Supreme Court order on 16th of March ensured that the arrested activists remained in jail. Teltumbde and Navlakha joined them on Tuesday.

Why is the public up-roared by the judgement?

Many believe that the government has been using this case as a demo to silence its critics. To add up to the conspiracy, that order which was delivered in 2018 was delivered by the then Chief Justice of India, Ranjan Gogoi, who was nominated last month as a member of Parliament, an appointment believed to be backed by Modi’s government. Many intellectuals such as Romila Thapar, Arundhati Roy and Prakash Ambedkar have called the Tuesday’s arrest as unlawful and based on a fabricated case.

“Well, I am off to NIA custody and do not know when I shall be able to talk to you again. However, I earnestly hope that you will speak out before your turn comes.”