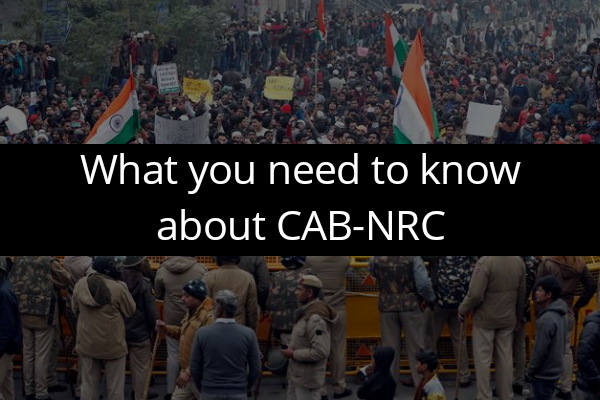 The purpose of the NRC update in the state of Assam is to identify Indian citizens – who are presently residents of the state – so that illegal migrants who entered the state after midnight on 24 March 1971 can be identified. However, the fate of those who would not be able to get his or her name entered in the register is now a matter under judicial and legislative consideration and more or less uncertain.
The matter became a greater worry for the govt when the National Register of Citizens (NRC) was updated in Assam, leaving out 1.9 million residents, a significant section of whom were Hindus.
Assam and the whole of North-East saw NRC as a law in their favor as they have been fighting for decades against illegal immigrants and have been attacked for their culture, heritage and businesses, but now the tables have turned.

The govt in response to the NRC’s haywire outcome in Assam introduced a bill, Citizenship Amendment Bill (CAB) to counter the affects of NRC on such a huge population of Assam.
The Bill provides for persecuted minorities professing to be Hindu, Christian, Sikh, Buddhist, Jain and Parsi, from three neighboring nations, Pakistan, Afghanistan and Bangladesh and who have been staying in India since December 31, 2014 or earlier to apply for Indian citizenship. India, under this law, shall accord them the status of citizens. The Bill clearly excludes Muslims, noting that they are the majority in these three nations.

The govt’s exclusion of Muslims from the affects of NRC has been condemned all through the nation, and rightly so.
The govt. has responded with saying that if Hindus are not protected inside a Hindu majority country like India, where would they seek shelter, which is true, but if you have accepted other religions as well, why leave out Muslims? Should the Muslim families living for ages now have to prove their belonging where others enjoy their rights and exploit them.
Amit Shah went on to say in the Parliament that NRC will be applied across the nation in the coming times, which the student wing of India opposed in huge numbers and are still doing so and are asking for revocation.
CAB disturbs the whole essence of India as a secular country and accepting of all people independent of their culture, religion, race. CAB ensures that this govt. is trying to oust Muslims from the country.

Assam and the North East have been struggling for their identity and have protested against any illegal immigration whether of any religion are not being heard. Their issues stand still while the whole nation discusses CAB.
In the wake of utmost civilian protests, Assam is seeing curfews and internet blockade.
What started as a movement by Asamese people is lost for voice.