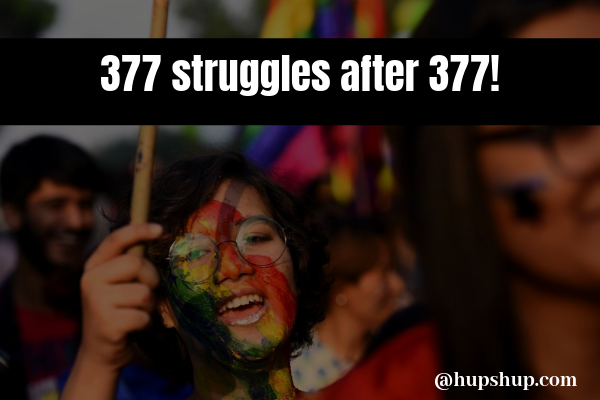 September 6th marks the one-year anniversary of Section 377 being struck down by the Indian Supreme Court and decriminalising consensual same sex relationships.
The verdict has a long history and struggle and hardwork of people from the community behind it. In 2009, Delhi High Court decided to strike down section 377, saying it violates the fundamental rights to life, liberty, and equality but again in 2013,the supreme court overturned the Delhi high court’s judgment. In a recent interview with CNN, Supreme Court lawyers Menaka Gurswamy and Arundhati Katju, who led the battle against section 377,came out as a couple. “The loss in 2013 was a loss as a lawyers, a loss as citizens. It was a personal loss. It is not nice to be a ‘criminal’ who has to go back to court as a lawyer to argue other cases”, said Menaka Gurswamy.

What exactly has changed in the lives of people living in the closest for so long? For some of them, leaving one closet feels like entering into another one. As with open identity comes stereotypes. While still dealing with acceptance from the society as well as from your own self, the fight is still on because we might have decriminalised same sex relationships but same sex couples cannot adopt, LGBTQ+ people cannot openly serve in the army and no property inheritance rights.
There are certainly more open conversations about the queer community but we need to be more inclusive. Schools and colleges should be safe spaces for children who are only just beginning to realise they are queer.
There are so many people and their stories, that needs to be heard , because they have been suppressed for so long just because of their sexual orientation and declared criminals for existing.

The representation of LGBTQ+ community in corporate sector, government sector and sports in very poor. Although mainstream media has shown some real characters like Rahul Kapoor in ‘Kapoor & Sons’, played by Fawad Khan and Karan Mehra in ‘Made in Heaven’, played by Arjun Mathur. Both these characters show the vulnerability one feels during an identity crisis and lack of acceptance from family for LGBTQ community.
In a first, Dutee Chand is an Indian professional sprinter and current national champion in the women’s 100 metres event who came out in open about her sexuality, becoming India’s first openly gay athlete.
More power to such people and it’s about time that we accept not only out of box ideas but out of box people too.