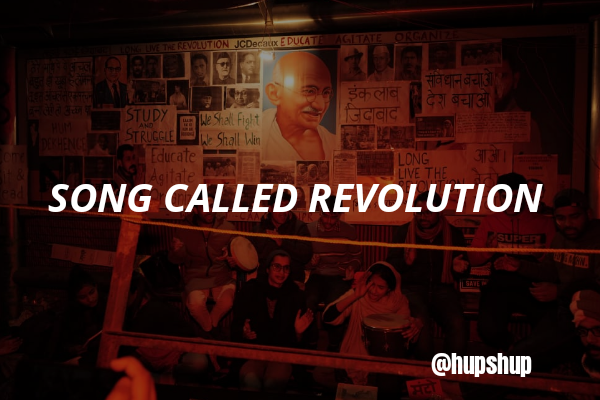 “In a nation, where liars speak
silence is a crime
In a burning nation,
a song called revolution is sung”

My friend saw this quote somewhere on the walls of Hauz Khas. Whenever I read it, it sends chills down my spine because how relevant it is today. The foundation of India is under threat and the nation is fighting the discriminatory CAA and NRC by humming ‘Sare Jahan Se Achha’ and ‘Hum Dekhenge’ .

Despite all the censorship, endless trolling by IT cell, number of internet shut downs, police brutality and what not, government is still not able to curb the voices of dissent. Artists are showing their dissent through their art. Songs, poems, articles, street plays, cinema, videos, illustrations even memes are contributing to the fight against a fascist government.
Art has always been influenced by politics. Faiz Ahmed Faiz shook the foundations of the oppression through his poems which reverberates even today.John Lennon became a major influential symbol through his music and peace activism during Vietnam War. R.K. Laxman,a cartoonist known for his biting satire, through his famous character common man, commented on the socio-political state of India.

And like always, our artists have held the flag of humanity high through their art,whether it is Ankur Tewari’s Woh Hum Nahi or Poojan Sahil’s Hindi version of Bella Ciao. The fire of resistance against the establishment has inspired rappers like Divine, Dub Sharma and Sedhe Maut to convey their emotions through rap. Poets like Amir Aziz weave words so beautifully that we tend to believe his words ‘Hindustan Ek Khawab Hai’.

The art will live long enough to tell the story of our revolt, how India fought back to save its identity, that how women took the center stage and rose against oppression, how roads were filled with people chanting Inquilab Zindabaad, how government could not tolerate students protesting for their rights, how some journalists took their job seriously and saved us from one sided stories, how we the people of India refused to give up on our country.