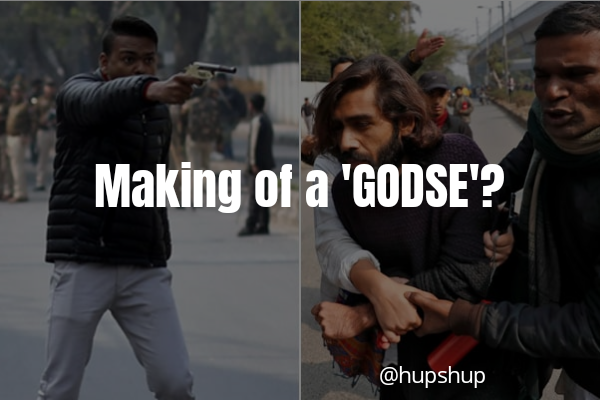 Today morning, we observed GANDHI’s martyrdom’s day with having a man come through the police security with a gun in hand, shouting “YEH LO AZAADI”, the man, in full attendance of the Delhi Police ended up opening fire and shooting a protester’s hand.
What Delhi Police did not do, and could not do is that they could not ensure protesters’ safety who’re (much ironically) seen as threat.

The man who opened fire during an anti-CAA protest in Jamia area of New Delhi went live on Facebook moments before a Jamia Milia University student was shot in the hand.
The assailant has been identified as Gopal Sharma from Uttar Pradesh’s Gautam Buddha district. He has been taken into custody and is being questioned.

One of the posts found on the shooter’s Facebook profile was ‘Shaheen Bagh, khel khatam (game over)’. In another status shared two hours ago, Gopal wrote, “Meri antim yatra pe mujhe bhagwa me le jaye aur Jai Shri Ram k nare ho (On my final journey, cover me in saffron clothes and chant Jai Shri Ram’. The man is a criminal in the eyes of law, but what drove him to perform such an act, what is the sheer hatred against the protesters in the anti-CAA rallies, what is it that tells him that it is okay to do this.

MAKING OF A GODSE is rather an ambiguous title where I don’t want to target a certain religion and put it under the radar but this is not about religion now, this is turning into what we’re being fed by news channels, and political leaders. Not while ago, BJP Union Minister Anurag Thakur led a pro-CAA rally chanting “Desh ke gaddaro ko, goli maaro saalo ko.”
If this kind of hate speech is not the seed of the matter, what is? If the constant propaganda against one religion/area/people (in this case anti-CAA protesters) is not at the very bottom of this fiasco, what is?