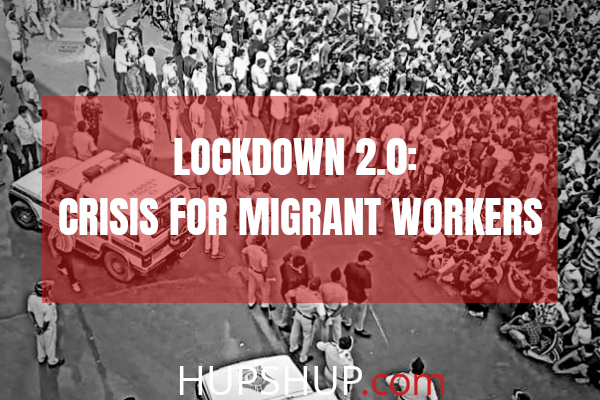 Mumbai, the city with the highest cases of coronavirus, became the site of a huge protest this afternoon as hordes of migrant workers gathered outside Mumbai’s Bandra station today protesting against the extension of the lockdown.

The crowd mostly comprised migrant labourers who live in the slums around Bandra station. With no jobs, and limited shelters police messages that food would be delivered to them or they could shift to a camp, do not convince them.
“They thought the trains will start and they will go home,” Uddhav Thackeray told the media.
Mumbai has the most number of cases than any other state in India due to it being the Financial Capital of India and thus having high numbers of flyers coming and going out. The city has shown the most escalation in the number of cases, and now it might get worse.

Days after violent protests in the city of Surat, hundreds of migrant workers converged at Varachha’s Mohan Nagar in Surat.They too demanded provisions to be sent back home.
In Andhra Pradesh,  around 150 migrant workers from Hyderabad started their journey on foot to Palasa in Srikakulam of Andhra Pradesh.

LOCKDOWN 2.0, most brutal to the migrant workers!

This was seen in Delhi few weeks back when lakhs of migrant workers assembled at Anand Vihar Bus Depot to get to their hometowns. The same crisis is being repeated in different parts of the country, mostly cities where migrant workers have come for work. The most frightening and surprising thing is, they would not settle for shelter, or free food, the people just want to go to their hometowns. And why? This must come as a shock to the higher classes but this: a question to be raised, this is an issue which is coming out to be the most relevant. If they had better homes in the cities they’re staying in for work, would they have chosen to stay? If they had better facilities and better circumstances of living, would they have chosen to understand the urgency of the situation? Is free food all you got?