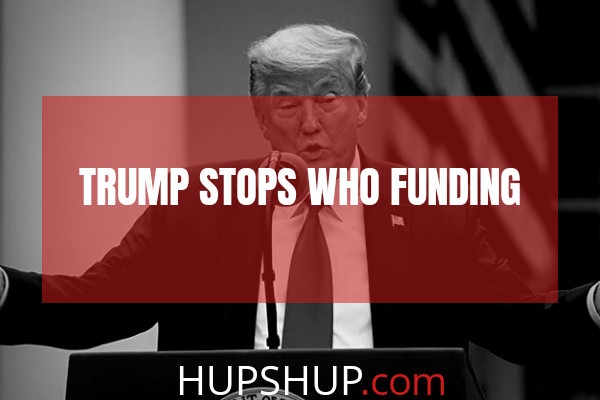 On 14th of April, President Donald Trump said today he will suspend U.S. funding to the World Health Organization (WHO). Trump accused WHO of “severely mismanaging and covering up the spread of the coronavirus,” at a White House press conference. Trump’s govt now will be starting a pending a 60- to 90-day investigation into how the agency has handled the response to the COVID-19 pandemic.

The COVID-19‘s disastrous effect has brought the whole world to its knees but in spite of being the most powerful country, the most affect was experienced by USA, where more than 677,000 cases have come in light, and the country has seen more than 34,000 deaths due to the pandemic.
Everyday, the death toll in USA keeps rising and any relaxation and flattening of the curve is seeming hugely far sighted. USA’s deadliest day was just yesterday when it recorded nearly 2,600 additional deaths from the new coronavirus in 24 hours, a new record and the heaviest daily toll of any country. USA has been trying to manage the disease but till now they have failed. In light of this massacre, President Trump has been blaming WHO’s lack of emergency and timely efforts for the spread of the Pandemic and has announced that USA has halted WHO’s funding.

Why Trump’s actions will help nobody?

If USA who is the single biggest donor for WHO will be bringing a pause on their funding, the WHO will be facing major setbacks in their effort to help the nations where help is required the most.
Trump did not specify how much money he intends to put on hold. In WHO’s 2-year, 2018–19 budget cycle, the United States was the largest single donor, providing almost $900 million of WHO’s $5.6 billion budget.

The announcement came on the day that WHO’s first “solidarity flight” left Ethiopia carrying medical supplies to African countries to assist them in fighting COVID-19.

In his press conference, Trump noted that China contributes less than $40 million to WHO’s annual budget, whereas the USA are the single biggest donor for the funds. “As the organization’s leading sponsor, the United States has a duty to insist on full accountability,” Trump said. He complained about what he called WHO’s “disastrous decision” to oppose travel bans.
He also pointed out that WHO failed to promptly declare a Public Health Emergency of International Concern (PHEIC) on the first meeting with China. Trump said that over reliance on China govt.’s information also hampered the issue and wasted a lot of time when WHO did not investigate into the whistleblower’s information.

Although experts have been raising question about his own delay in action and putting the blame on the likes of WHO and China. In one of his tweets, dating back to 25th January, he has praised China wholeheartedly of managing the disease:

Trump’s scapegoating of the WHO comes after he ignored warnings about the disease for over two months that has now killed more than 34,000 people in the U.S, the highest national death toll. In late January, influential White House economic advisor Peter Navarro wrote a memo to Trump that warned COVID-19 had the potential to claim hundreds of thousands of American lives and derail the national economy unless immediate and sweeping containment efforts were implemented.
Trump’s slothful measures stand out against the examples of other nations. South Korea, for example, confirmed its first case of COVID-19 just one day before the U.S. Yet their robust public health service tested three times as many citizens per capita has kept reported cases under 11,000 compared to more than 600,000 in the U.S., which also has a triple the fatality rate.

Reacting to Trump’s previous threats,  WHO Director-General Tedros Adhanom Ghebreyesus said last week that it was not the time for such rhetoric.

“The focus of all political parties should be to save their people. Please don’t politicise this virus”

While WHO’s efforts of making testing available in the poorest of nations has been going on diligently and Tedros added to his statement saying, “WHO is reviewing the impact on our work of any withdrawal of U.S. funding and will work with our partners to fill any financial gaps we face and to ensure our work continues uninterrupted.”

While China’s actual figures of the disease are still in suspicion and critics all over the world have been blaming them for neglect and misinformation, USA’ sudden halt of funding will only deteriorate the global fight against the pandemic.