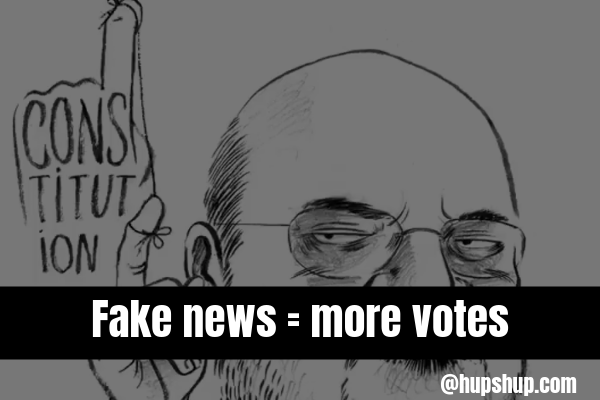 “There is only one sin, only one. And that is theft. Every other sin is a variation of theft…when you tell a lie, you steal someone’s right to the truth.”, wrote Khaled Hosseini in his book The Kite Runner.
What we’re experiencing right now in the biggest democracy of the world is a wildfire spreading which is not only making us believe the most atrocious lies but also is helping the current political superpower to win elections one after another. The BJP IT cell has time and again produced and published news that was otherwise false, but who bothers to do a fact check when the ruling party’s official social handles publish a news, I’m shocked at the loss of accountability in today’s govt. led by BJP.

In 2018, in one of BJP’s IT Cell’s meeting, Amit Shah, then president of the Bhartiya Janta Party, now also Home Minister of the country suggested to the team that how fake news can be made to lure voters. His sarcasm filled speech hinted at how the party should be able to produce and broadcast any news, whether sweet or sour, whether real or “fake”. He demanded that the party should be have the power to make people believe on whatever it shows. It is venomous that a president of a party speaks this way to the members, and it’s more shocking that his party workers have taken his suggestion in command, and have acted brilliantly on it.

BJP IT cell and as well as its president Amit Malviya had claimed that Rahul Gandhi had visited Ram Rahim Singh’s Dera which a fact check report has completely nullified.
He also tweeted an edited video of News anchor Ravish Kumar and accused him of supporting Congress. The full video shows Ravish was making his statement in the third person and was talking from the point of view of PM Modi and how he should say it.

PM’s official app, The NaMo app also readily shares and broadcasts fake news, ranging from false suicide cases to inexistent fatwas.
One such news said that a devotee of Sabrimala Temple committed suicide after women were allowed in the temple, however a fact check website, Alt News rubbished the news, and reported that the priest died a day before the historic entry of women in the temple.
How disgraceful and how irresponsible of our the ruling party to share such news that can not only create a stereotypical mindset in the country but also have the potential to start communal differences.
Ravish Kumar of NDTV, has time and again dismissed fake news broadcasted on WhatsApp mostly by the BJP’s supporters which covers everything that has not been happening from military developments to fake communal threats, and calls them “WhatsApp University”.
He demands his viewers to check facts, but from where and how when all of the News channels are only spreading one name, MODI.

Somesh Kumar that goes by the insta handle @somsesh made this cartoon of Amit Shah and how he is manipulating the constitution according to his own terms. This post of Somesh Kumar garnered around 2k views and was shared and reposted all over the internet, and why not, this is the content that should go viral, and not fake news. More power to him!