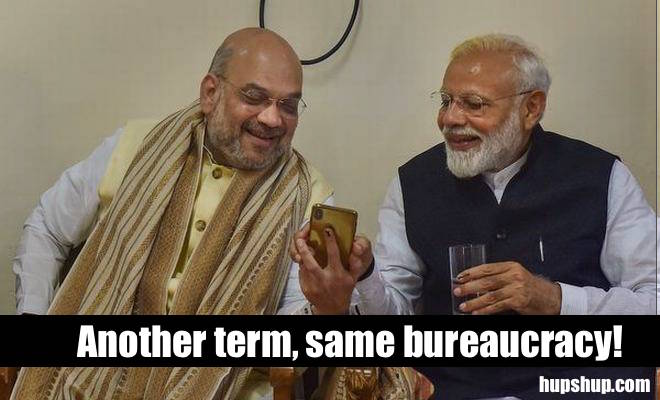 On grounds of secularism, decency, public responsibility, accountability, or even heading a goddamn democracy, Modi government fails us and I do not say this with pure angst towards the man or the party, I for one have been an avid speculator of the party’s actions and did feel cheated when the mega-story of One man VS Congress did not pan out as it was sought. The Modi-led government has been in-charge but have mostly handed their IT department to its full potential, the newsrooms are full of praises for newsrooms like they’ve been sold to AMBANI (and guess we’ll never know). However, I plan to discuss and go through all the sections on which I found this government to be absolutely taking their fan following for granted.

Firstly, I know that I should limit my article to the second term of Modi-govt now that he’s in power again and the majority has branded Modi as our vigilante against corruption, against Congress, against the nature of being just purely a third-world country but I cant, and I won’t. I have issues with his kind of leadership and I think this is the time, so at least we can critique them to be at their best.
Let me first talk about how a terror-accused, cancer faking sadhvi got the ticket to become a Member of Parliament. MP, as they say, comes with a lot of power, a lot of influence, lot of authority and I have major problems that someone of that background is the voice of a constituency. How could a public figure of that composure and caliber could talk of how Gau-mutr had cured her cancer, while JJ Hospital and TATA Memorial have slammed her repeatedly for misguiding patients. This is the absolute lowest of the dungeons that we could go in, that a constituency like Bhopal constituency is represented by her in the Parliament, but as they say, if not BJP, then who?

The name politics/ religion politics is what many of the journalists have addressed till now and I wouldn’t think another heads-up would cleanse any of the minds that have been inflicted y their politics. But, Jharkhand saw its 14th mob-lynching case in 4 years in the face of Tabrez Ansari. Tabrez Ansari was returning to his home late at night when a group of people accused him of stealing a motorbike, he was subjected to continuous profanity, beating and was recorded while being forced to chant “Jai Shree Ram”, is this is not a hate crime from one religion on another, then what is this? I am not saying that`only the Hindus have bigoted understanding of their religion and that BJP is personally involved in crimes like these, but when a national leader/ majority party/ ruling party/ country’s messiah’s party throws hate on one religion by their speeches, actions, prejudices, people like these who mob-lynched Tabrez feel powerful, feel as if they’re doing service for the nation. The mindset drives the harshest when a force calls them in a particular direction. BJP does that and young, brainwashed minds do submit. I reject to call Narendra Modi’s party’s politics as a step towards secularism. You do not mix religion with politics in secularism.

I know I’m only talking about the societal issues (which holds the maximum weight while living in a democracy like ours) but for all the people who are conditioned to only look for GDP growth, for development, and for all those who still believe in Modi-nomics, here is a stat: India’s unemployment rate in April 2019 rose to 7.6 percent, the highest since October 2016, and up from 6.71 percent in March 2019. While Nirmala Sitharaman’s “Bahi-Khata” budget seems promising, it does not give suited benefits to the middle class. The party surely believes in taking the power from super-rich but has not given any to the super-poor and this has its biggest letdown.

All said and done, all that I could write and write more would be too much for one article I guess, I’m limiting my criticism and analysis for this one now. And howsoever big of a critic I might of the Modi-led government, a part of me still wants to believe in him, still waits for the day when his mind just snaps out of pure conscience and I hope the day comes sooner and he realizes his popularity, his potential and the position he holds as the Prime Minister of the world’s biggest democracy and I hope he gets back to his demeanor and control. I hope “Ghar vaapsi” comes sooner for the leader the country voted for.