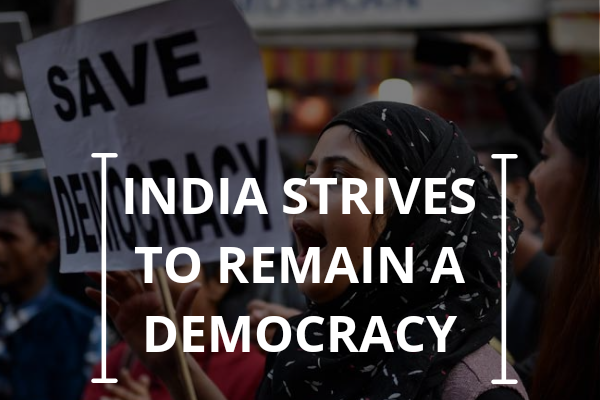 Recently the Indian government passed the citizenship amendment bill on 11th December 2019. As per this, it amends the citizenship act of 1955 by providing a path to Indian citizenship for Hindu, Sikh, Jain, Parsi and Christians from neighboring Muslim countries like Bangladesh, Pakistan and Afghanistan. This act was the first-time religion was mentioned while giving away citizenship.

India enshrines secularism in it’s constitution, despite everything; a non-secular bill has been passed in the parliament. This has led to massive outrage all over India. There is an ongoing protest all over India. People have come down on roads to raise their voices against the citizenship amendment. Our constitution makers were firm on making our nation secular. Howsoever, Indian model of secularism is different from the western model because in Indian secularism is all about treating all religions equally and making no discrimination between any religion. Whereas the western model of secularism says that the state will stay as far as possible from the church (the one dominant religion in west).

Students from premier institutes like Delhi University, Jawaharlal Nehru University, Jamia University and Indian Institute of Technology are protesting all over the nation. This does not end here. It has turned violent in many parts and the heat has reached Delhi as well.

Something similar happened in the Aligarh Muslim University on the eve of 15th December, students were protesting peacefully when the policemen and IAF personnel rushed inside the gates of the university and threw stun grenades over students. Over 50 students were injured and 21 were detained.On 19th December, a protest was organised in New Delhi at Jantar Mantar. The government had cut down the internet supply in major parts of Delhi and section 144 was imposed all over the capital. This curtails the fundamental right of peaceful assembly in Article 19. The condition is such worse in Assam that the police is instructed to shoot at sight during protests.

Delhi isn’t the only state to experience internet shut down. In August 2019, right after the abolition of Article 370, there was an absolute internet and media shut down in Jammu and Kashmir which lasted for more than three months. There is a complete internet shutdown and curfew in Assam as well. Internet provides social media, which is the fastest growing network and the only platform where people can express themselves and ensure that their voice is heard. By taking away the power to use internet, the government wants to supress the voice of millions of people.

Fundamental rights are being suspended; the government is turning autocratic. The ongoing political scenario is very similar to that of 1975 when unexplained emergency was imposed by the then prime minister Indira Gandhi. The misuse of power has always borne consequences and the current government must realise it. A sense of fear and unrest has hijacked the nation.

We must remember Orwell’s warning against jingoism and Big Brother from 1984. The day isn’t far when all our fundamental rights will cease to exist! We all must stand together and fight for democracy.