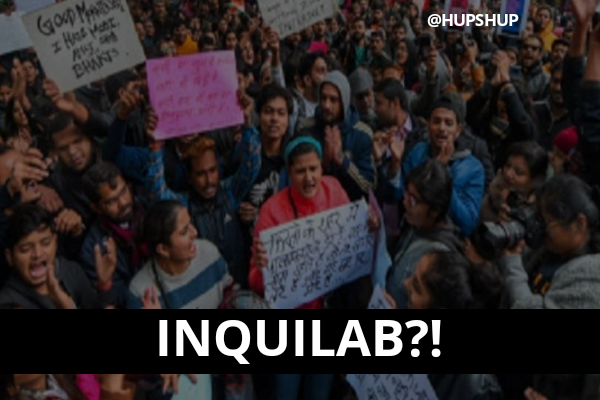 In Delhi, universities like Jamia Milia Islamia, JMU, Ambedkar University and Delhi University and Aligarh Muslim University from Uttar Pradesh.
However these protests took a violent turn when Delhi Police forcefully barged in the campus of Jamia, lathi charged students, fired tear gases in the hostels, reading room and library, the police threw bricks to break windows thrashed the students with batons.
After the news of the police attack on Jamia Millia students started filtering over the social media, Aligarh Muslim University students came out spontaneously in solidarity. The terrifying videos and appeals for help evoked strong reactions across the campuses, with AMU amongst the first to respond on December 15. The police,stormed through the main gates into the campus, dragging out students and taking them away, firing tear gas, rubber bullets, stun grenades.
The students in both universities said that they were suddenly turned into ‘enemies’, targets to be viciously attacked and beaten and fired at.
This is not the first time when students have been attacked for protesting. Few months ago, JNU students were lathi charged for protesting against the fee hike.

But why is the current government so afraid of student protests?
The answer to that question can be easily found when we look at the history and important of the protests in India and across the world.
During Vietnam War, college students organized students for a Democratic society to show their opposition to the war. When the American troops finally withdraw in 1973, President Nixon cited these students protest to be one of the reasons behind the withdrawal.

The pro democracy Protest in Hong Kong was kick started by two student groups who organized massive college and school boycott to mark their anger against China’s rule over them. The student led struggle is still on to fight for democracy.
Greta Thunberg started skipping her school on Friday to call for stronger actions against Climate Change.

Protesters are being called anti national and anti Democratic because those in power do not want them to know enough about the history of protests.
According to narendramodi.in ”a few students of the Morbi Engineering College protested against the exorbitant rise in their food bills. These protests soon gained widespread support and ignited a state wide mass movement against the government.
Narendra Modi had displayed a keen interest in social activism and had already participated in several movements against price rise, inflation and other issues affecting the common man. As a young Pracharak and associate of Akhil Bharatiya Vidyarthi Parishad (ABVP), Narendra joined the Navnirman movement and dutifully performed the tasks assigned to him. “

As you can now determine why the government is treating students as a threat and want to curb their voices. They are detaining people, imposing section 144 and shutting down internet.