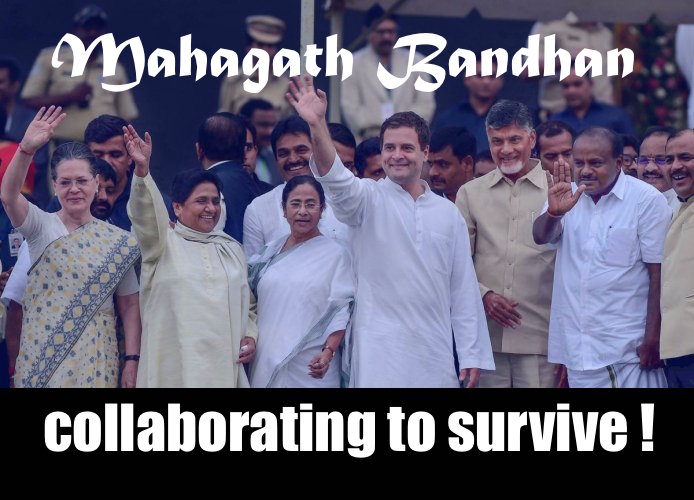 India is among only the few countries that allow multi party system in a democracy. However in India, the routine is very different when it comes to forming a government with the consensus of these parties against a national party, which is in today’s case is Bhartiya Janta Party(BJP). The opposition proposed a union within themselves across the nation to form a coalition in order to beat BJP, because they have accepted that beating BJP with the Modi’s wave, despite of the govt. making huge blunders regarding economy, reservation, infrastructure will be not only difficult but

impossible for a singular party. The vote bank of India is divided into beliefs a party follows more than the agendas of a party, and is subdivided based on caste, creed,culture etc. The extravaganza that the opposition is trying to pull is far sighted and needs a broader perspective and a common goal, common proposals , common motives, which is however the loophole. Since the beginning of the formation of such parties they have been calling out each other, blaming each other for conspiracies, controversies, scams, violence and what not, and now, if they come together, the voter wouldn’t have a choice but to doubt a party’s every previous claim ever, since all of them only talk about each other.

For example, BSP and SP in Uttar Pradesh have singling out each other since decades and now have announced an alliance between them to contest for 2019’s general elections. While the two of them hold the command of two very separate vote banks (Yadavs and OBCs for SP and Jatavs and MBCs for BSP) , it is still problematic because there is lack of one leader and one mindset, because at the end of the day, there should be a single representative. This alliance has also caused problems for Congress as BSP-SP have declared to exclude Congress from this alliance with the exception of 4 seats in which the alliance will not contend against Congress.

The Mahagathbandhan which was mostly seen to be lead by Congress is now slipping from its hands as more powerful ministers have come into the frame and the lacking image of Rahul Gandhi would be a reason for Congress to worry, and no other party would be willing to bet its future on a weak leadership. While all goes on, the Mahagathbandhan has still not announced a Prime Minister candidate, and from just months away from elections, it will not be easy for the voters to bank on sudden enforcements. The Mahagathbandhan is overestimating the fall of BJP and it would not be easy to counter its Hindu vote bank, mob lynching is one thing, but Mandir is still a hope for all the BJP voters. This is a time of careful decisions and we must practice our right to vote in the most rightful way we can in this circus that we call Indian Politics.