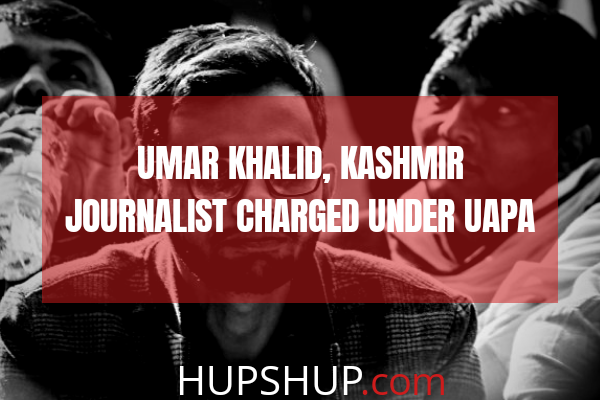 Amidst a global pandemic, India is observing untimely arrests of some of the names that lead the voices of dissent in India. Journalists and activists such as Umar Khalid, Masrat Zahra among other have been booked under the Unlawful Activities Protection Act (UAPA) in the last week.
The amended UAPA allows the government to proscribe individuals as terrorists and empowers more officers of the National Investigation Agency to probe cases. A person charged under the act can be jailed for up to seven years.

Masrat Zahra, 26, who is a photo journalist from Kashmir has been known for her works around women and children amidst conflict. Her work has been covering Kashmir in situations of conflict and curfew. On Monday, Jammu and Kashmir Police registered a case against Masrat Zahra under section of 13 UA(P) Act and 505-IPC in Cyber Police Station, Kashmir Zone.

“Cyber Police Station received information through reliable sources that one Facebook user namely “Masrat Zahra” is uploading anti-national posts with criminal intention to induce the youth and to promote offences against public tranquillity,”

– Jammu and Kashmir Police in their statement

Zahra said in a statement that she was summoned to the Cyber Police Station on Saturday but was not informed of the charges against her. “Since there was a lockdown and I didn’t have a curfew pass, I told them (the police) that I cannot come immediately,” Zahra said. “They pressurised me to come but I didn’t go. They didn’t mention a first information report.” The police has not specified which are the posts that have attracted such serious charged.

Apart from Zahra, Jammu and Kashmir have also filed complaints against author and journalist Gowhar Geelani and The Hindu journalist Peerzada Ashiq.
In a statement, J&K Police said they received information from sources that an individual named “Gowhar Geelani” was indulging in unlawful activities through his writings on social media. In contrast, only an FIR has been filed in connection with a report filed by Peerzada Ashiq, for the news article he did on a banned militant group, The Police have called it as fake news and to have the potential to incite violence.

Amidst all this, India has dropped two places on the 2020 World Press Freedom Index by Reporters Without Borders and is now ranked 142 out of a total 180 countries.

Under a sudden series of events, Delhi Police has booked JNU Student Leader Umar Khalid and Jamia Millia Islamia students, Meeran Haider and Safoora Zargar, and under the Unlawful Activities (Prevention) Act (UAPA) in a case related to communal violence in northeast Delhi over the Citizenship (Amendment) Act.

In the FIR, the police has claimed that the communal violence was a “premeditated conspiracy” which was allegedly hatched by Khalid, Haider and Zargar. The students have also been booked for the offences of sedition, murder, attempt to murder, promoting enmity between different groups on grounds of religion and rioting.
Khalid had allegedly given provocative speeches at two different places and appealed to the citizens to come out on streets and block the roads during the visit of US President Donald Trump to spread propaganda at the international level about how minorities in India are being, the FIR alleged.

“The country is facing a massive health crisis, however, the state machinery is busy harassing and framing student activists in false cases to suppress voices of dissent,”

The Jamia Coordination Committee (JCC), a group comprising students and alumni from the varsity, had condemned the arrest and demanded his immediate release.

WHAT ARE THE NECESSARY ACTIONS AMIDST MEDICAL EMERGENCY?

A larger conspiracy says that the govt is taking complete advantage of the lockdown amidst the Coronavirus pandemic and hence is taking in custody anyone that they couldn’t during normalcy. There can be no protests and display of contempt on roads and in rallies. The Journalists’ Guild has criticized the arrests of the journalists and curbing voices when there’s already an medical emergency in the country.

Following this, the police had said investigations into the JMI violence and northeast Delhi riot cases were done impartially, and arrests were made after analysis of forensic evidence.