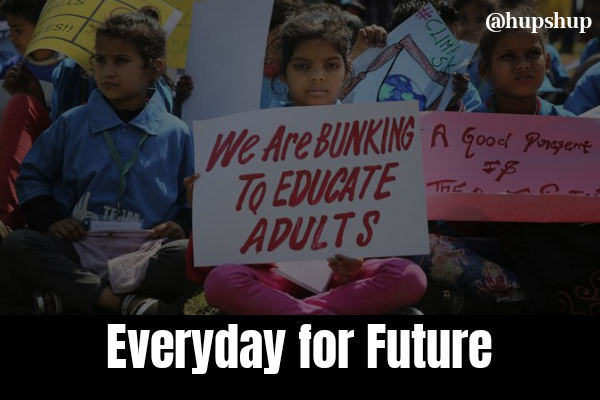 “You are never too small to make a difference” — these words of 16 year old Swedish environmental activist Greta Thunberg.
Thunberg, first garnered international attention by skipping school and staging sit-ins outside the Swedish Parliament. That grew into a movement called Fridays for Future, Youth for Climate, Climate Strike, Youth Strike 4 Climate and now, students all over the world participate.People all over the world are expected to walk out of their schools and workplaces Friday to demand action to address the global climate crisis.
Hollywood star Leonardo DiCaprio, who has been actively campaigning against climate change, recently slammed world leaders for not fulfilling their promises.
Amidst all of this, still our leaders are declining or are negligence about Climate Change. Governments are not taking suitable actions and big corporations are mass producing plastics. According to the Centre for Science and Environment in Delhi, India’s plastic production is growing at 2.5 times the rate of GDP growth of the country.
An estimated 1,753 plastic items were studied and a whopping 79% were non-recyclable plastics, often comprised of multiple layers (like chip or biscuit packets).
Pepsi was leading the way in plastic pollution followed closely by Britannia, Perfetti, Mondelez, ITC, Coca Cola, Parle, Nestle and in the last place, stood two local brands Rusi (milk packets) and Aachi (spice and pickle sachets).

We are holding our flag high against corporations and world leaders to tackle rising sea levels and temperatures. But as Mahatma Gandhi said, ” Be the change you want to see in the world”,
there are many small gestures and incremental adjustments that we can make to begin feel less helpless and more a part of the solution.

Let’s start by avoiding single use plastic like plastic bottles, straws, lids, cups, plates etc and move towards more environment friendly alternatives such as pattal plates ( plates made of fallen leaves), make sure you always carry a cloth or jute bag with you to avoid using polythene, carpool as much as you can or use public transport, segregate waste and learn about waste management and educate others as well.
Now is the time to accept and act on the reality. We are sitting on a ticking time bomb. If not now, then when?