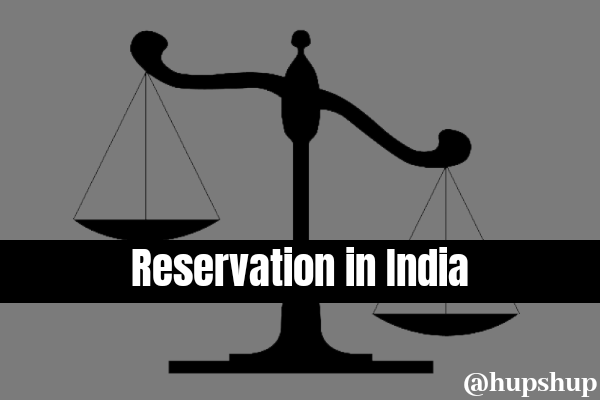 As per article 46 of the Indian constitution, the state has all rights to promote and foster the scheduled castes, tribes and weaker sections in the field of economy and education. Right after independence, it was necessary to introduce reservations based on caste and tribes because of the endless atrocities against them. These groups of people constantly faced social exclusion. The discrimination was skyrocketing and thus, the reservation was justified. However, this reservation was only meant to last for ten years and a report was supposed to be submitted on how useful the reservation system has been.

No proper report was submitted and the then government continued reservations in its political interest. After a few decades, Bindeshwari Prasad Mandal came up with his Mandal Commission Report in 1983 which was implemented in 1990. It aimed to reserve seats for other backward classes other than scheduled castes and scheduled tribes.

The country’s affirmative action plan was launched in 1950. Ever since the reservations have been introduced it has been a political plank for parties rather than a helping hand to the people in need. It is ironic that even after sixty-nine years of reservation, we have failed to uplift the ones in need. Caste discrimination still somewhat exists in the society and the poorest have no access to use the reservation. Reservation system has majorly benefited the privileged section of people who already had the resources needed to move forward in life. As per the reports 22% of Indians continue to live in poverty. Caste based atrocities still continue. Disparity between people of different castes or tribes still exists.

Recently the government introduced 10% reservation for the economically weaker section. With this 59.50% seats in all government educational institutions and government jobs are reserved. This a wake-up call. Our country works more on reservation than on merit. This is one big reason for brain drain. Due to his,affirmative action has also resulted in fuming rage from the people of general caste who have to compete much more in order to secure seats in government institutions or jobs. Bollywood movie ‘Aarakshan’ discusses this issue with depth. In 2006, series of anti-reservation protests did rounds in order to fight the reservation for the other backward classes. This was second such protest, first being Anti-Mandal protests in 1990.

It is high time that we take necessary steps to undo the damage. Instead of focusing on increasing the reservation percentage, focus can be shifted on providing quality education to all the children and increase employment opportunities. Parity can only be brought by providing equal resources, not reservation of seats. Reservation of seats only gives a sense of security to people; it never makes them feel equal to others. Even after securing a seat by reservation in a government institution, the people still feel inferior. The root cause is not having equal resources. Let us all hope for a better future of India, where the priority is to attain equal resources for all.