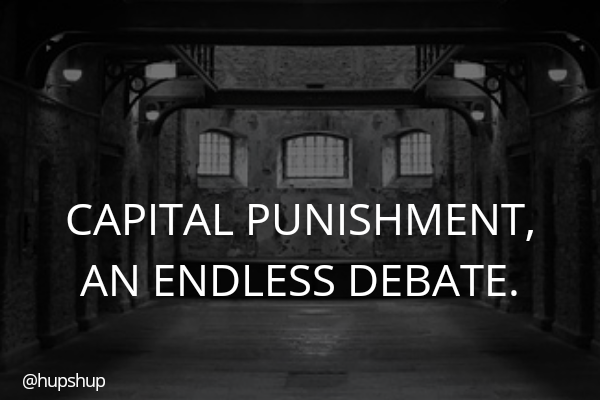 The debate on capital punishments is endless, and logically so, because it ultimately legalises the act of killing in the name of justice whether to instill fear or to satisfy the “collective conscious” of the society. The statistics around the world make us question it’s effectiveness and raises concerns about it’s inherent dismissive nature as a tool against crime but we can’t forget that criminals that are executed have committed morbid crimes.

This has become a hot topic of discourse in India after the Supreme Court declared that the convicts of Nirbhaya case were to be hanged tilll death and since then it has sparked this debate in the entire country once again. A survey conducted by Thompson Reuters foundation ranked India as the most dangerous country in the world for women and days after the news of brutal rape and killing of Priyanka Reddy swept the country in a fit of rage. “Naturally, we demanded the hanging of the rapists but does it really solve the problem? Does it make our women safer? Is the non-existence of a strict law against rapists the real problem?

Unfortunately, the answer to all these questions is negative. Hanging of rapists isn’t a new phenomenon, Dhananjoy Chatterjee had been executed for the rape of a 14 year old girl in 1990 and since then the laws have only become stricter and the rape crimes against women have almost doubled. Countries like Saudi Arabia, Pakistan etc practise very strict laws against rape and yet rank very high in the list of most dangerous countries for women. The real problem is the dysfunctional society that still attributes women as objects and their bodies as residents of the family’s honour, and social system that still blames women for getting raped. Demanding death penalty for rapists simply suggests we see rape as henious a crime as brutally killing a number of people. We must not forget that punishments has to be in par with the gravity of the crimes committed and if we see these two crimes at par with each other, then we have only failed our women and girls.

According to the most recent government data around 90 women in India are raped everyday and in most of these cases the perpetrator is known or a relative, sadly we only raise voices when the victims die. In a scenario like that capital punishment is only a distraction from the real problem at hand, which is much more complex and difficult to deal with. Not to forget, the direct consequences of such a law. It will give an incentive to the rapists to kill their victim, but we should not be bothered by it right? Because it’s better to die than be a rape survivor in a country like India. In most of the cases, the victims don’t even report about the crime not only in fear of having their entire lives ruined but majorly because in most cases criminal is a relative and such a punishment makes it even more hesitant to report the crime which results in no punishment at all.

We might be enraged for a few days and talk about being progressive but the very next week we go back to questioning the character of women who wear short clothes, drink alcohol and moral policing them on how to behave, what to wear, what to eat and what not. We return back to homes imposing curfews on our daughters while we let our sons go out, beating our wives, catcalling our neighbors, forcibly marrying our sisters and daughters, harassing our office colleagues, passing some sexist slur at our classmate and if we are not doing all of it we become silent spectators to everyday harassment that women face, knowingly or unknowingly contributing towards the rape culture, hence,We must talk about issues like consent, equality and try answering why are we unable to see our women as people beyond their bodies?