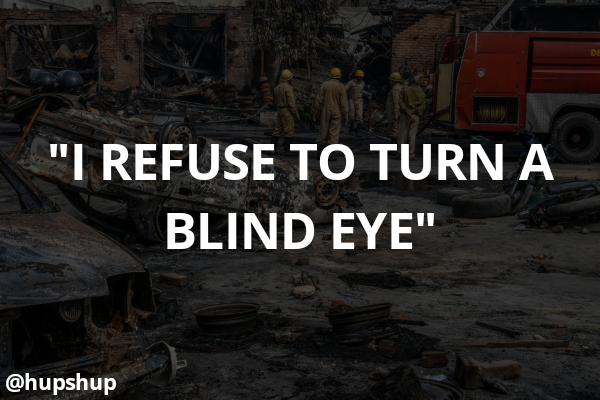 I entered my college in 2019. I scored decent marks in my 12th board so after a little hustle bustle of cut off lists, I got my current college and was quite happy and excited about my college life. And like every other fresher I was blissfully unaware of my political surroundings and my main concerns consisted of successfully enrolling into any of the cultural or academic societies. I did succeed. I got into the dramatics society of my college and from there my political awakening happened. But I don’t know what good has it brought me or my friends. It started a series of fights with my parents, mental and emotional breakdowns in living room, a constant angst, feeling of helplessness and wanting to do something but failing miserably. But I refuse to let their bigotry slide in the name of nationalism.
I have read history and now I cannot see it repeating itself in front of my eyes, in my city, in my own home. I cannot tolerate that I am not able to practice what I learn in my classrooms. Voices are being suppressed even at micro level like colleges and schools. I can see it happening, any piece of art which contains anything related to politics, sexuality and religion is simply dropped by our teachers. The very institution which is made for us is now killing our ideas and freedom of speech. I refuse to be controlled by fascist leaders not just in our country but in our education institutes.

My home, Delhi was burning because of hate. Hate which claimed the lives of people and the silence that follows. People lost their everything, from their identity to belongings,life time savings and their home. They cannot visit their home, everything was taken from them by a mob. A mob which was fed hate by their leader. I refuse the silence and normalizing the curfews they are imposing on us. Even after so much happening in Delhi, the main stream media continued to cover a facade. A facade of two monkeys trying to outdo each other. I refuse to believe all the propaganda spread by the mainstream media. I refuse to turn a blind eye towards the people who are suffering. I refuse to use my privilege to suppress or cover the voice of others.I refuse to listen to hate speeches and I refuse to obey any order which questions a particular community’s existence.