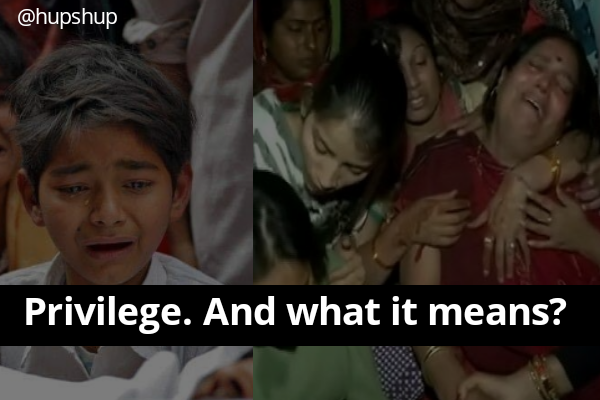 I publish news and I’m shaken with every breath I take, with every statement I say, I censor myself, I critique myself whether or not I should say it, I fear for not being neutral, of not being shaken by a hindu death as much as I’m shaken by a muslim death. I fear for talking about rights of minorities so much that I completely overlook the dire despair of the majority (in some cases), but you know what I don’t fear for? For having a roof on the top of my head, and my parents coming back home alive, of bullets and lathis, of politics being so ugly that it completely tarnishes my identity, of politics being such an opportunist that it not only fakes its own authenticity, it also fakes the severity of what’s happening. That I get curfew-ed at home, and whether or not I’ll see my friends the other day, I will, I know it, I will. My home is safe, my workplace is fair, my Instagram might be a noisy activist speaking and uploading stories, “DEATH COUNT”, “THIS PICTURE WON’T LET YOU SLEEP TONIGHT” but let me tell you, I sleep just fine.

Nearly 7,000 paramilitary forces have been deployed in the affected areas of the northeast districts, hundreds of Delhi police personnel are on the ground to maintain peace. More than 200 people have been injured, and 43 deaths we’ve registered till now, the number could be more the next hour, or while I’m writing, there could be another death, which I won’t know, because it has not made its way to the headlines yet, what another death to my blog, “OH BUT WHAT ABOUT PRECISION, FOR GIVING THEM THE RIGHT NEWS” and what will they do about it? What will they? They will screenshot it and put another grieving tagline to it, what can I do? What can we all do? I have seldom been so aware of my own privileges that I am right now, I am fucking going mental about it because I cannot do anything about it, “HOW COULD I RISK MY LIFE”, how could they? why did they?

On Delhi being another Kashmir, I don’t like it, why should any of these two regions be linked to one another, I’m sure the victims are different and I’m sure the offenders will be different too, but how could I stay away from the very link I see, that we’re being something we’re not, on the words of our religion, of a powerful political figure, or what’s so deep-rooted it has not been able to wash itself, even after being bathed in blood so many times.
So what I say is important? This Liberal vs Bhakt fights is important that has been going uninvited to so many funerals where all they do is kill another. How could you not see the very privilege I have of writing this account, and this being a very personal account, since I have not seen any personal tragedy, 43 deaths, and I never knew even one of them, not even driftly, How could I do what I want to do? How to brush off the privilege? I would not know. But there’s one thing I don’t lack- EMPATHY. I don’t defend a defaulter, neither I try to justify a death. But you just put up a story “I CAN’T LIVE IN THIS CITY ANYMORE, THIS IS LIKE LIVING IN A SLAUGHTER HOUSE”, but yet you continue to live here, and you live here just fine.

One thought on “Privilege, and what it means?”