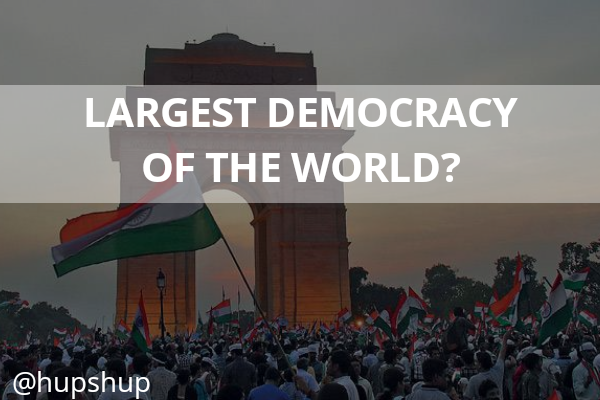 “What are we supposed to do? Where are we supposed to go?” A 20 year old, maybe even younger, Muslim girl asked Ravish Kumar while crying her eyes out and I had the honor to witness this man go speechless. This is when I realized how truly helpless we are today as a citizens of a Nation, that is apparently the largest democracy in the world.

It’s scary how we don’t really have the answer to the girl’s question and it’s even more scarier that we have pushed her to a point where these are kind of questions she is seeking answers for. Our leaders, who were supposed to protect us stand up there on the stage lying through their teeth without any hesitation and all we do is believe whatever they say as the last word. Media, who was supposed put out the right information for us to analyze and make opinions is now shoving its opinion down our throats and we don’t resist because we don’t even realize it. Truth and reason has taken a back seat and the only thing that remains is the glamorization of politicians in a way that they appeal to the public no matter how shallow they are from the inside.

A good debate is a sign of a healthy democracy, we say,  Forget about a good debate, we have stopped having debates altogether. Around 40 journalists have been killed in Indian in the span of 5 years (2014 – 2019) and approximately 200 instances of attacks on journalists have been reported. India ranks 138th among 180 countries in Media freedom index. According to a report from Reuters more them 60 people have died due to non lynching’s in India between 2010 – 2017 and yet the regime has been unable to take any action against the violent mobs in most cases. Anybody who dares to disagree is either killed or demonized as the enemy of the country and yet we are called the largest democracy in the world.

Everyday people are fighting for things they shouldn’t have to fight for, things they should be just given. For respect, for acknowledgement, for mere existence. Students should be inside the classrooms, not on the streets trying to teach the responsible adults on how to be human. What can be said about a Nation whose citizens are constantly living in the fear of being rendered nationless? Is this what a democracy looks like? Does it reek of fear, injustice and blood?

This is not a by chance happening, it’s a systematic deconstruction of a plural, secular and democratic nation through the tools of hatred and polarization and to all those who feel it isn’t about them, someday they will come to you, one day they will make you an outsider too and it will be too late to even ask the questions then because just like love, hatred also has no boundaries.