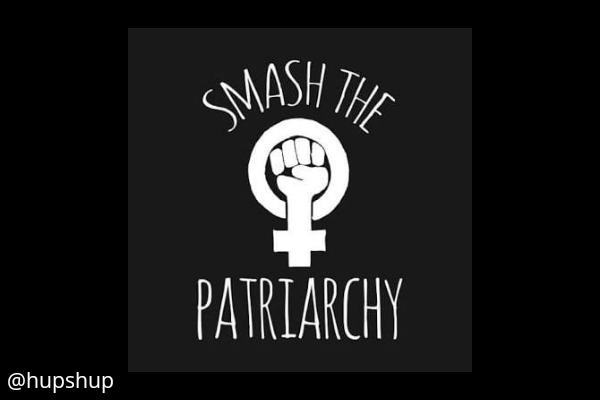 In simple words patriarchy can be explained as the dominance of man over woman. This is quite evidently present all over India. It can be witnessed in all spheres of life, be it political, economic or social.

India has been a democracy since 1947, the constitution enshrines equal opportunities to all. However, reservations are provided wherever and whenever required. Even after 73 years of independence, there is no proper representation of women in the parliament. All these years we have only witnessed one woman as our prime minister, i.e. Indira Gandhi.In today’s date there are merely 78 women MP’s despite having 545 seats in Lok Sabha. This fact itself speaks a lot about patriarchy within the Indian parliamentary system. The fact that women do not have equal representation in the parliament is a shame.Women have to constantly fight harder to get equal rights as men.

Even in 21st century, there is disparity between the wages of men and women. According to a survey by Economic Times, the gender gap is at 19 percent. Women are still not considered competent enough to men, even after holding the same degree. This also points to the gender role stereotyping where women are labelled as home makers and men are the bread winners. Majority of Indian women are forced to give up their jobs after marriage or childbirth. It is naturally expected of a woman to give up her career for the sake of her family’s happiness. The social expectations from them are high. The two most important milestones of a woman’s life are marriage and childbirth. A woman is only considered ideal if she is a good wife and a good mother. She is given no identity of her own. Unable to do so, she is forced to feel that she has failed at life.

Men alone cannot be blamed for dominating women. The fact that women accept male dominance is itself a shame. Women shame other women for not following the highly patriarchal societal norms. Recently a woman catcalled young girls for wearing shorts in a metropolitan city. She told them that they should get raped just because they were wearing clothes that did not cover their legs entirely. This incident gained momentum and it was discussed all over the internet.Wearing short clothes is still considered immoral. The society questions a girl’s moral character if she wears short clothes, comes home late, has male friends, etc. Cricketer Hardik Pandya made sexist comments on Koffee with Karan. It drew a lot of attention. BCCI took steps against him but this incident merely shows the ingrained misogyny in minds of Indian men. Howsoever the cricketer took to twitter later and apologised by posting “ After reflecting on my comments on Koffee with Karan, I would like to apologise to everyone concerned who I may have hurt in anyway. Honestly, I got a bit carried away with the nature of the show. In no way did I mean to disrespect someone’s sentiments. Respect.”

Recently we witnessed the amount of popularity gained by Bollywood movie Kabir Singh. Movies like these foster patriarchy and objectification of women. Over the years a mentality has developed amongst the society where all men feel entitled to women.  Several women took to twitter to express their dismay with the movie. One user posted “That’s a classic case of toxic masculinity-an inability to gracefully accept rejection/ failed relationship and lack of emotional intelligence.” Objectifying women is simply ignored in households and social gatherings. Families become blind when it comes to a woman’s interest. The desirability of a son and the undesirability of a daughter also a major contributor to the patriarchal behaviour. All women must hold hands and stand up for themselves. They must fight against the patriarchal society or else it will never end. Our upcoming generations will face a hard time bringing parity in the society. This women’s day we pledge to cleanse misogyny out of our world. Let’s strive for more and better. Grab control ladies, shatter all glass ceilings. Let no limit stop you from self-actualisation.