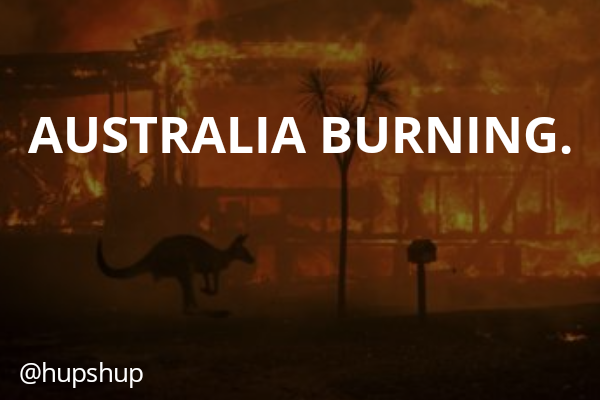 Australia is a continent familiar with bushfire and bushfire management but the fires which were burning across the nation has been described as unprecedented in ferocity and scale. Australia broke it’s all time temperature record twice in December. An average maximum of 40°C was recorded on 17th December,broken a day later by 41°C. This year a natural weather phenomenon known as the Indian Ocean Dipole has meant a hot and dry spell across the country. Along with numerous human-caused fires, some natural reasons include fires occurring by lightning, with a very small percentage started by spontaneous combustion of dry fuel such as sawdust and leaves.In total, around 5.9 million hectors have been burned across Australia’s six states – an area larger than the countries of Belgium and Haiti combined. Worst affected state was New South Wales with 3.6 million hectors burned. The costs that the entire humanity, not to mention the billions of animals, plants and other organisms have to bear during the unfortunate event of a forest fire are too expensive. They pose several life threatening hazards, such as carbon monoxide danger, fatigue, pollution, smoke and dust and even chronic diseases. Wildfires have persistently been a threat to the human, flora and fauna populations and we have not even taken account the toll of these fires on the economy. Australia is one of the biggest exporters of coal, iron ore and liquified natural gases. Australia’s combined exports of the three natural resources work out to nearly 7,300 Australian dollars, or almost $5,000, a year for every adult and child in the country, reports The New York Times. The Australian mining and energy industries have long benefited from China’s spectacular growth. China accounts for almost two-fifths of Australia’s exports. The country’s vulnerable environment and growing dependence on China have raised questions about the sustainability of its economic success. Now, after these fires, the Australian leaders are being questioned for their policies regarding their mining business.Coal is one of the biggest sources of climate change gases, Although most of them have dismissed the questions regarding Climate Change but the nation’s target under the Paris Agreement – the global deal to tackle rising global temperatures – is a 26-28% reduction in emissions by 2030. Prime Minister Scott Morrison, a conservative leader and political ally of President Trump, came to power in part by defending the mining industry. He sees action on global warming as a substantial threat to an industry that directly employs 250,000 Australians and contributes to the jobs of many more. Australia has not had a recession for almost three decades. While economic growth is slowing, with the retail and construction industries faltering, the mining industry remains a bright spot. Reducing Australia’s dependence on Coal will disturb the major economies altering their Coal needs.
Now, not only Australia exports coal to major economies but also produces most of its own electricity through coal. Business owners with fridges full for the summer season worry about the future.the fires would further cripple Australia’s already anemic consumer confidence, increasing the chances of a rate cut next month, as well as causing damage to the economy through increased air pollution and direct harm to industries such as farming and tourism.The Tourism Industry had also taken a significant hit, is has damaged the public confidence and Australians are more cautious about spending money on travel. The international Tourism business is also affected as the issue of safety and pollution is concerned. At some favorite tourist sites, people who depend on the natural beauty of the land worry that the fires may threaten their way of life.Victoria was declared a state of disaster as cities chocked with thick smoke. In major cities like Sydney and Melbourne dense smoke descended over busy metropolitan areas like a blanket. Some region lns of country recorded air quality measure 20 times above hazardous level. Air pollution, which has affected 30% of the population, and would cause reduced worker productivity, increased health spending and lower crop yields.

“Our economy is vitally dependent on China, and yet our security ties are with the U.S., and our economy is vitally dependent on fossil fuels, and yet our landscape is relatively exposed to climate change,” said the chief Australia economist Chris Richardson at Deloitte.  Australian should put emphasis on meetiy the world’s Sustainable Development Goals (SDGs). Shifting the world’s 14th-largest economy would be no easy task, but we have to start somewhere because as cliche as it sounds, but climate change is real and we have no Earth B.