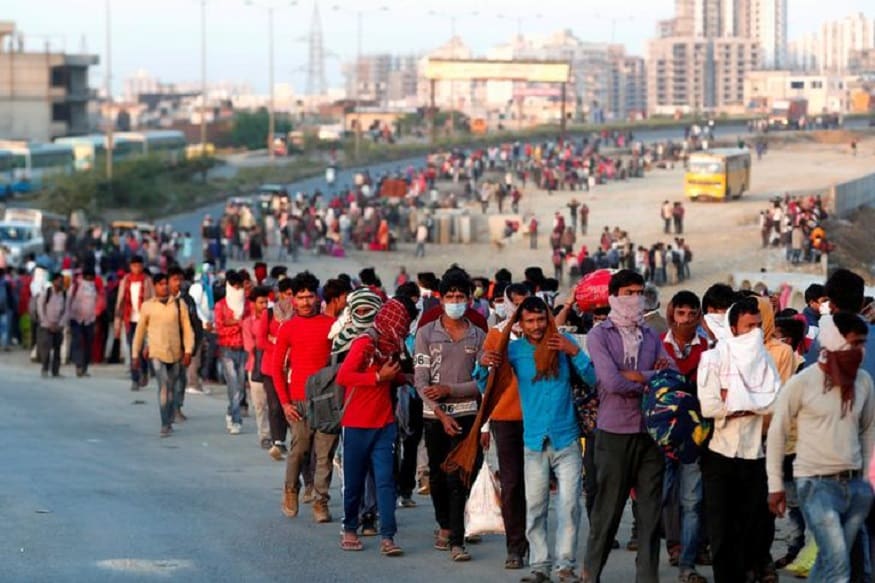 Imagine this, you’re a labourer in the economic capital of the world, and you’re surviving on bare minimum, you are not given enough awareness about ration cards and you’re not in a condition to own even a small tent-like home, and now you’re hit with the pandemic that has not left even the fierce, so how could it spare you? You lose your job, you lose your home because the landlord wants his rent, you’re surviving on the mercy of few NGOs because they don’t ask for cards when they give you food. With all that, you’re also hearing the news of how an epidemic is here to take lives, and you’re sleeping, in the open, you’re eating, in the open, you’re living in the open.
You don’t have your family here, and the fear is killing you more than hunger, and the govt consoles you with trains that you’ve to be registered for, with buses that you’ve to apply for, with tickets you’ve to pay for, with only your feet at your disposal to walk you home, with only some promises that ignite your hope immediately after they crumble it down.

The crisis hits the poor of the country the most, and we’re a country of 22% poor (BPL) population according to the consensus of 2011, and this is when migrants suffer being even counted in the consensus. India has been working furiously on paper and news channels to help the poor, but not much is being displayed. The workers that have been walking still rely on hitchhiking on trucks going from one place to another, on people who offer to help, and on reporters reporting them honestly.

The plight of the poor has been shown time and again but the govt is only pushing its responsibilities further by giving us make-believe numbers, presenting us with monotonous speeches, and making itself lesser and lesser culpable by going with the show that’s still hit because the lead actor acts immensely good as the one who’s been shot and not the one hunting.

There will be many points in your day where you will be an optimist, and will be reading a book, and watching a web show, but it won’t last long because at 8, there is only despondency on the news channels, and in the eyes of those who worked for us. They are today, in the most terrible times, are finding that their hands are only good for making buildings, and not to be held when they need to be, that their endurance is not tested enough in the fields, that they’re now tested on tracks.

A man pulls his pregnant wife, and 2 year old daughter on a cart he made it himself to make it home, he has been walking since 17 days. A pregnant woman gave birth to her child on the highway without the supervision of any medical professional, got up and then walked another 100 kms. 100 people jammed in a truck they found themselves, from Dharavi to Uttar Pradesh and were told to stay in toilets in quarantine. 40 million children from poor families affected.

This is the calamity we’re facing right now, and all those asking for peace for Gujrat riots, and for Kashmiri Pandits exodus, for Kerala floods are shut. Years from now, these migrant workers will remember 2020 as the worst year of their lives and tell us that nobody came forward to help them, the government was insufficient even after a 20 lakh crore package, and the justice preachers were absent. They will remember this as the greatest tragedy and nobody will be able to give them justice, me and you will still be fighting on whose land does god live, and we will forget how god would not dare to come and live with us, we don’t help those who help us.
We’d stay silent then, like we’re right now and we will carry on.