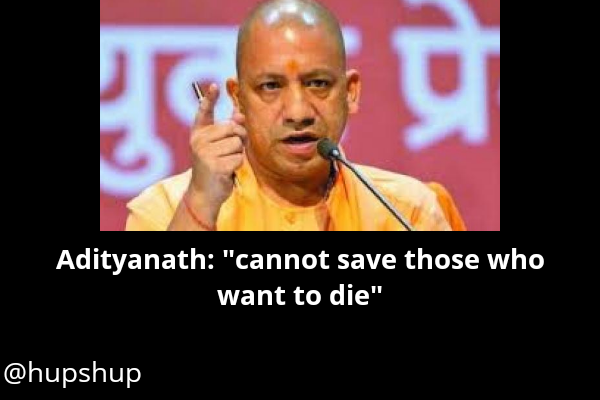 Uttar Pradesh chief minister Yogi Adityanath on Wednesday defended the state police on the deaths of anti-Citizenship (Amendment) Act protesters, saying they were shot by other “rioters” and nothing can be done to save “those who want to die”.
He said instead of being criticised, the Uttar Pradesh Police should be “appreciated”.

In the discussion in the state assembly on the governor’s address, Adityanath defended the role of the police in dealing with rioters during the protest saying “Jo jis bhasha main samjhega, usey uss bhasha main samjhayenge (We will talk to people in the language they understand),” he threatened.
Close to 20 people had died across Uttar Pradesh during the anti-CAA protests. Contrary to Yogi Adityanath’s claims that no one died in police firing, UP Police DGP OP Singh in an interview had said one person was killed in police firing during the anti-CAA protests. He had said the police did open fire in Bijnore and Kanpur.

2 thoughts on “Adityanath: “cannot save those who want to die” to anti-CAA protesters”