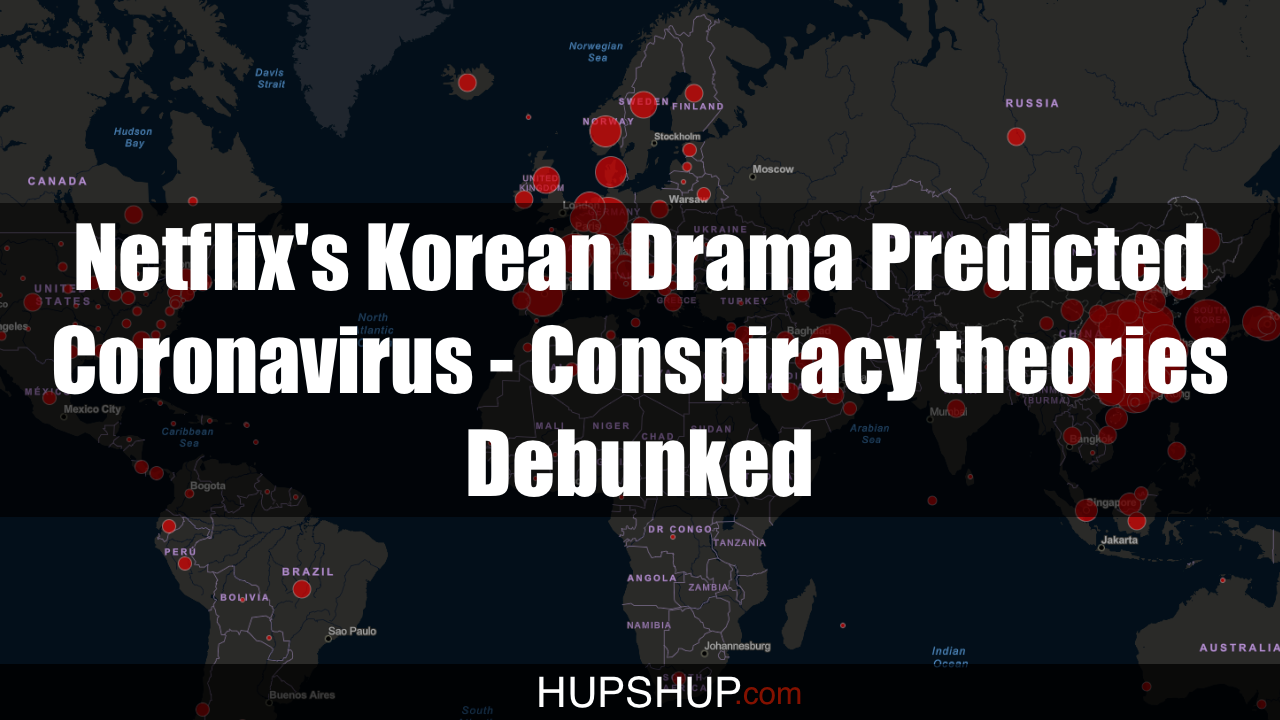 We have seen videos being circulated on social media about a Korean Show “My Secret Terrius “, in one the episodes are claiming a virus from the corona family killing a character from the story. Let’s now look into it.

A few months after the novel Coronavirus, that generated in the Chinese city of Wuhan, spread worldwide killing thousands of people, people on the internet, being quarantined in their houses noted that a Korean drama show which was aired on Netflix had actually predicted a mutant Coronavirus killing one of the show’s characters’.

In the 10th episode of the 2018 “My Secret Terrius” show, a doctor is seen telling an individual, accompanying a dying patient at a hospital, that tests have depicted a mutant Coronavirus; more dangerous than the previously known strains of the virus, naming 2002 SARS and 2012 MERS diseases.

Coronavirus disease (COVID-19) is a new strain that was discovered in 2019 and has not been previously identified in humans.
WHO was aware in many studies that the only Pandemic that can happen it will happen by Respiratory Syndrome
all movies based on that study

The show’s doctor explains that the latest respiratory virus has been tweaked by humans to attack lungs immediately and that its incubation period has been reduced from between 2-14 days to 5 minutes only. According to the show, the mutant Coronavirus has a mortality rate of 90%.

A few people on the internet, expressed their astonishment at the correlations between the scene and today’s reality, despite the fact that COVID-19 has an incubation period lasting up to 14 days and a mortality rate ranging between 1% to 7%.

Some people are doubting if it is a conspiracy or a mere coincidence.

Ppl need to watch “my secret Terrius” on Netflix made in 2018 season 1 episode 10 and fast forward to 53 mins u will not be shocked, Coronavirus is a man made virus set out for depopulation! Conspiracy theorists are not wrong! #staysafe

While some shared the short video clips from the show to support conspiracy theories suggesting that the virus was developed by certain countries to attack their enemies. There are others who believe that the virus was developed as a biological weapon and many countries have taken part in harvesting this virus, whether by providing needed labs, doctors or financial aid. That’s why the whole world remains silent regarding the virus’s source and only exchange accusations instead.

This isn’t the first time people are referring fiction to back their claims about various conspiracy theories. It is really important for every individual to research the content they consume. There are tons of fake claims and videos, so make sure you don’t fall for anything as such.

People should realize that of all this is surely not the time to spread things like this which can create chaos. Communities are being stigmatised already. Doctors, researchers, medical workers, and the govt are doing everything there’s to be done and using all resources at their disposal to stop this pandemic. The last thing we need is people losing trust in the authorities, hence, creating chaos. Now again this doesn’t take away your right as a citizen to question the actions of your governments. Once we have overcome the pandemic, there will be investigations critically analyzing the course of action adapted and what could have been done. Until then, do as advised, stay at your homes and follow social distancing.

Neighbour reached out, very upset and alone. Been reading lots of pseudo-science and conspiracy theories about coronavirus. Can we stop spreading unverified misinformation and try to share reputable sources, please?! pic.twitter.com/H6MotXketS

Prefer first-hand information by organizations like WHO, CDC, Ministry of Health and Family Welfare

With the current situation, we are bombarded with news about the novel coronavirus pandemic, it can be hard to figure out what’s a scam or rumor and what’s vital information. The ways in which the COVID-19 has transformed the way we work and keep ourselves entertained feels so unreal.

To understand why there’s so much misinformation out there, several theories circulated online have suggested the disease may have been created as a biological weapon by the Chinese government.

“Conspiracy theories about manmade viruses are not new. We saw this with HIV — the rumor that the US made it and introduced it into Africa. But they are really dangerous kinds of things to get spread around,” as told by Gerald Keusch, a professor of medicine and international health and associate director of Boston University’s National Emerging Infectious Diseases Laboratories.

Novel corona is a genuinely new virus, and there’s no way it could have been engineered by humans

In a recent podcast episode, Racaniello with two other researchers discussed a fascinating preprint paper (that’s currently under peer review, according to the authors) about the virus origin. The key finding: that SARS-CoV-2 is “not a laboratory construct nor a purposefully manipulated virus.”

The paper, which was uploaded onto Virological.org in February, is written by several leading microbiologists who closely examined the SARS-CoV-2 genome.

Specifically, they found the unusual biochemical features of the virus could only have come about two ways after the virus jumped from animal to humans, or what’s called zoonotic transfer. The ways as discussed in the paper, are:

In other words, nature came up with these weird characteristics in the genome, either in an intermediary animal between bats and people or in humans after the virus infected one. As Racaniello put it on his podcast: “Humans could never have dreamed this up.”

He also said, no known lab anywhere in the world was working on a coronavirus like this one, and its closest relative is a bat virus found in a cave in 2013 in Yunnan, China, 1,000 miles from Wuhan.“Presumably, there’s a common ancestor, most likely from a bat or an intermediary animal that was contaminated by that bat,” Racaniello says.

Corona Would Be A Bad Bio Weapon

The theory that the virus was meant to be a bioweapon doesn’t make sense, either. One big reason: Covid-19 isn’t all that deadly or transmissible, compared to other potential pathogens out there.

“To make it as a bioweapon, if that’s what you wanted to do, there are scarier and more virulent pathogens to work with,” said Keusch of Boston University.

For instance, Ebola and the West African Lassa virus are deadly threats that can only be studied in biosafety level 4 labs, like Wuhan. Crimean-Congo hemorrhagic fever is a tick-borne disease that has a death rate of 30 to 50 percent. The global death rate for Covid-19, meanwhile, is around 3 percent at the moment, but it’s expected to come down dramatically as more cases are discovered in the coming weeks. And even now, it varies widely by country and region.

Simply put, if you wanted to release a bioweapon to kill a lot of people, there are much deadlier pathogens you could use. Unless the target is not to kill them all. Which in fact is altogether a different topic to discuss.