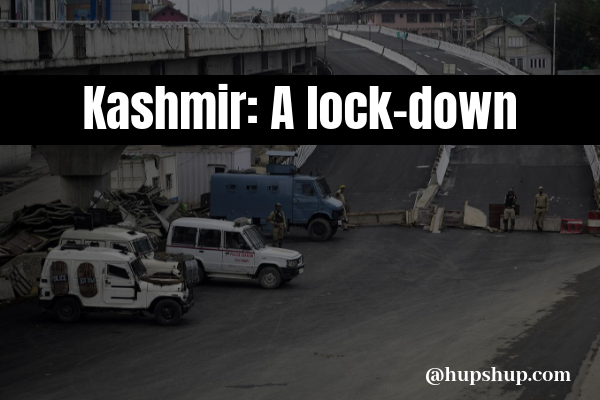 It’s been over a month since Jammu and Kashmir’s special status was abdicated. Since then the state, which now is going to be divided into two parts and get the status of union territories (Jammu & Kashmir, and Ladakh). While the withdrawal of Section 370 was requested and protested for since long, and has been publicized as nothing less than a festival, it’s not so harmonious as they are trying to convince us on TV channels. The lock-down or the communication blockage has been in effect since 4th of August. It’s been more than a month that we know anything of Kashmir other than from the unreliable sources, been a month since most of the Kashmiri students/ professionals have gotten in contact with their families back home, been more than a month since we know what’s happening with the people, and how have their lives changed after the rule out. With the lock-down, not only Kashmir has been put away in some kind of an arrest, but the rest of the country too is being put in a blackout about how the government is taking any steps there.

All through the past month, a few videos have been circulated and released on the internet and not one talks of peace and stability. The residents of Kashmir are fearful and are living in a constant state of detention, many of the videos talk about how the residents are not allowed to move out of their homes after a certain time, or how schools and universities have been closed down, this however sounds to be practices done only to curb terrorism and not to entice any conspiracies, but is only taking away rights, liberty and sense of security of the local Kashmiris. They’re 24/7 under surveillance and whether you believe it or not, this is an invasion of privacy/ of security/ of everything our Constitution stands for.

Satya Pal Malik who is currently appointed as the Governor of the state Jammu and Kashmir has promised that the development that has been delayed and denied to the valley will now take place with the abdication of Section 370. Satya Pal Malik says that the landlines have been started but as it stands no mobile phones signals have been unblocked. Many of the students have pleaded to the SC about the lost contacts with their families but most of them have gotten either no reasonable solution or no response at all. One of the student named Mohd. Aleem Syed was allowed to visit his family in Kashmir after he repeatedly submitted requests with The Supreme Court, his travel and security were to be taken care by the State itself.

While this step taken by the Government is being called not unconstitutional, it can more literally be termed as a manipulation of the Constitution and the outcome as we know is the haphazard conditions of the state. The government does not understand the gradual processes that goes behind any society to adjust with a policy and how their rights would be compromised after such actions, but as we have seen previously, the urgency in implementation has been a major drawback of this government.
I understand that now that the Article 370 has been revoked, development and modernization could take place and come in practice, but what is its cost? Is sense of security the cost of development or the sheer lack of liberty, or the fear of being constantly under scrutiny, how must a Kashmiri pay for the development he did not ask for in the first place?