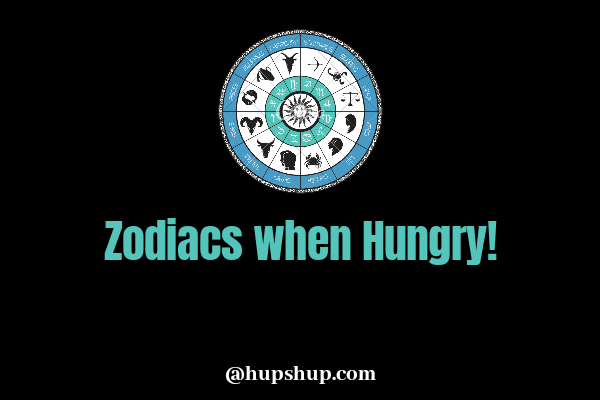 2. Taurus (April 20 – May 20): Taurus people are less likely to adjust, which means even when they are dying of hunger, they still would need that particular thing that they have been craving and be really choosy in deciding what they want to put in their body.

3. Gemini (May 21 – June 20): People who belong to this zodiac sign are always perceived as a social person and that says a lot about them even when they are hungry. They don’t like to tell people about their eating habits and they are really good at hiding their hunger but when offered, they will never say no to food.

4. Cancer (June 21 – July 22): Cancerians think more from their heart which makes them an emotional sign, but when their stomach is empty they get more vulnerable, meaning they can go from ‘aww’ to boiling mad. It is best for others to make sure that they are well fed so that they can think before acting strange.

5. Leo (July 23 – August 22): People born under this sign don’t really get hungry but eat mostly because they are bored easily. Leos have big, bold personality and they like to be occupied most of the time, so when they don’t feel like working they spend time with food.

6. Virgo (August 23 – September 22): Of all the zodiac signs, Virgos are known to be perfectionist when it comes down to their health and body and mind. They know what a good meal can do to your health and why skipping a meal is not a good option, which means that they can be trusted when it comes down to having a healthy and filling meal, because they are willing to pause all their work to refill their body with glorious food.

7. Libra (September 23 – October 24): Librans are the one who will always tell others about the food they are craving to get them salivating over their next meal only because they don’t like to eat alone. Librans are social animals but still they don’t like to admit that they are hungry so every time they are with people, they would talk continuously about food to make others hungry so that they would stop to eat.

8. Scorpio (October 24 – November 21): Scorpions are known to be mysterious which means they hide and lock their true feelings, but in the matter of food, they tend to complain when they are hungry or when the food is not good enough. These secretive people can get hold of their anger and irritation by attacking on food because that helps them to stop from being vulnerable.

9. Sagittarius (November 22 – December 21): Sagittarius are known to be go-getters who are always interested in doing something adventurous but when it comes to food, it is one of the most important thing in their life because their judgment gets impaired when they think with an empty stomach.

10. Capricorn (December 22 – January 19): People born under this sign are often the mom in the group, which means that when it comes to food, they plan ahead and keep snacks around them. Capricorns are known to be hard workers and they think practically and in this situation, they already plan their day with regular intervals. Even when they fail to keep food around, they can come up with a solution.

11. Aquarius (January 20 – February 18): Aquarius are often free-thinking and calm people, but when it comes down to food, they can rant for hours with an empty stomach. Not just that, they can become really stubborn and can act aloof, so it’s best to give them food or to leave them alone.

12. Pisces (February 19 – March 20): Out of all the zodiac signs, Pisces are known to be the laziest, to such a level, where they won’t even help themselves with food. Pisces are the only sign who would not react to hunger, either they would keep imagining a hot meal or would simply deviate their mind with work.