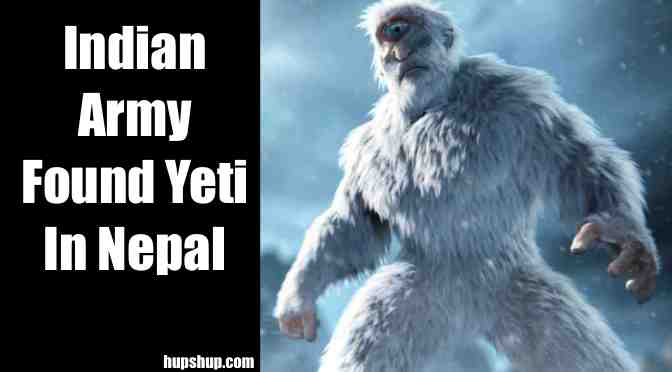 The Indian Army has claimed to find footprints belonging to the mythical beast, the Yeti, while mountaineering in Nepal.
The bizarre claims were made on social media recently, leading many to mock the Army for their claims of spotting the footprints of the ‘elusive snowman’ – as they described the so-called beast.
Addressing their 5.98 million followers on Twitter, the official account of the Indian Army expressed excitement that this was the first time the Army has spotted such footprints while on an expedition. The mysterious footprints were found close to Makalu Base Camp on April 9, while the Army was said to be carrying out a mountaineering trek.
A tweet sent from their official account read:
For the first time, an #IndianArmy Mountaineering Expedition Team has sited Mysterious Footprints of mythical beast ‘Yeti’ measuring 32×15 inches close to Makalu Base Camp on 09 April 2019. This elusive snowman has only been sighted at Makalu-Barun National Park in the past.
The Army also shared three pictures of the footprints they allege belong to the Yeti, alongside a photo of the group before or after their expedition. The pictures, which they claim show the 32×15 inch footprints, have been liked more than 17,000 times since the tweet was posted yesterday (April 29) – and the number is only growing.
While some of their followers congratulated them for their unusual find, others were quick to question whether the ‘footprints’ actually belonged to a Yeti or whether there could be a simpler explanation.
Many people pointed out the fact that there was only one footprint in the pictures, asking if this meant the Yeti was one-legged, while others asked if their account had been hacked. Others couldn’t believe they had tweeted such a thing, asking if they were pranking their followers. The Yeti, also known as the Abominable Snowman, is a mythical ape-like creature which is taller than the average human and is said to inhabit the Himalayas, Siberia, Central and East Asia.
As reported by the Times of India, the Army held on to the pictures of their expedition – or ‘photographic evidence’ – until they realised they ‘matched earlier theories’.
A spokesperson said:
So, we thought it prudent (to go public) to excite scientific temper and rekindle the interest.

Reacting to the jokes and ridicule they have faced on social media since, the Army rejected it, saying the ‘evidence’ they found has been ‘photographed and handed over to subject matter experts’.