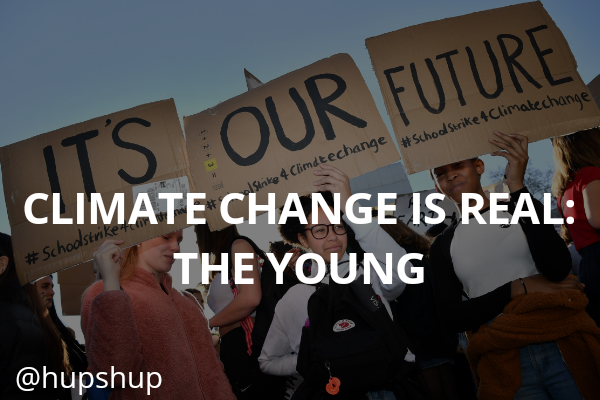 “Climate change is a hoax”, Surprisingly even after numerous incidents beginning from dramatic temperature differentials to the Australian fires some of the world leaders are of the same opinion and this is reflected in their action or inaction towards the environment protection. The governments around the world have failed to take appropriate action towards the growing problem and continue to do so even when consequences of their ignorance in the past have been staring them right in their faces, however, in these tough times the younger generation has become a ray of hope. It is in the realisation of the existence of a problem and need to take immediate action that these kids have brought a significant improvement.

It is because of the young people around the world that this movement has been able to gain momentum around the world. They are fearless and their devotion towards their cause is astounding. Not long ago a 17 year old swedish Climate activist Greta Thunberg took over the internet with her fearless self not only questioning the world leaders on their inaction towards the environment but also rebuffing them for failing their generation. In 2016, Autumn peltier, a Canadian activist advocating for clean water  confronted Justin Trudeauon on the ongoing water crisis in Canada. In 2017, Ridhima Pandey, a nine year old activist from India filed a lawsuit against the Indian government over it’s inaction towards climate action. The examples are endless but one thing that remains constant is that these kids have been able to do something adults have been unable to – TAKE A STAND.

The question is why are the adults still unable to change their perspective on things? The answer to this question lies in the words spoken by Isra Hirsi, a 16 year old activist from USA “It is my future, it is the younger ones’ future, and it’s less the older ones’ future.” The older people don’t care about the future. They are tangled up in their political messes and ideological differences and seem unable to give enough importance to the issue of the environment which is unfortunate. On one hand where the so called reasonable adults have failed to put their differences aside and work for the common benefit of humanity the younger generation has shown us the strength of togetherness and what are the things we, as a society, must focus because there is no planet B and it is nothing short of a massacre to rob our generation of Earth simply because you are ignorant and selfish. We can’t let our generation become a beginning of a mass destruction, and hence, We must keep fighting in our individual capacities.