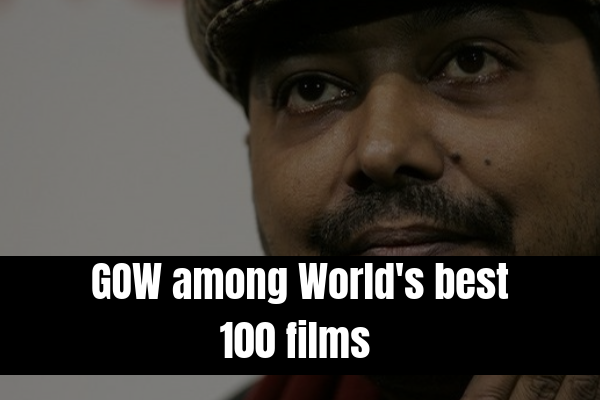 Last week The Guardian released their list of “The 100 best films of the 21st Century” which included movies from all over the globe. The Guardian did not categorise on the basis of language, or genre or even the magnitude of the film, all films on the same level. While the list has been getting some flak about certain films being a little down the line, the best news came when our very own Anurag Kashyap’s two part film “Gangs of Wasseypur” got the 59th rank on the list. By the popularity of the film, it has been hailed as the best film of Indian Cinema till now and now has made its mark on the global level as well. The first place was awarded to the critically acclaimed “There will be blood” also called Daniel Day Lewis’s finest performance till date.

“Mammoth two part Indian crime film that’s a long, long way from Bollywood…it’s got a valid claim to be India’s answer to the Godfather” wrote the review. Wishes from all over the country have been approaching Anurag Kashyap who started his career as a writer and was often branded as the “revolutionary of Indian Cinema” for making bold and hard-hitting movies.

While the whole film fraternity and the nation rejoiced on the inclusion of Kashyap’s in the list, he addressed the same by going on Instagram writing, ” P.S. this is also is that film of mine that totally destroyed my filmmaking life by the expectations it sets from me as a filmmaker and has been continuously so , and I have forever been trying to break away from it. Hopefully someday that will happen.”