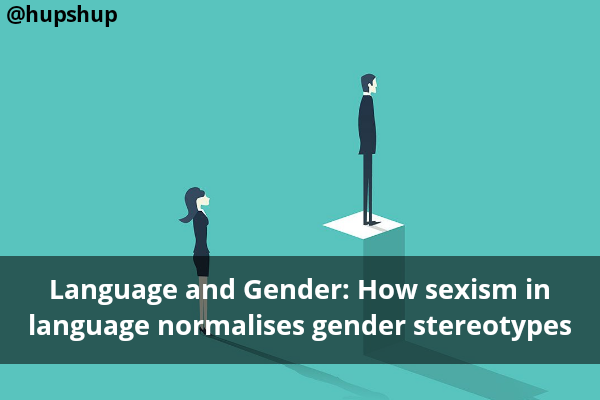 There are several roles laid out for men and women by society but they favour men over women because these rules are based on a patriarchal perspective. The power dynamics of men and women in a society is skewed, portraying men as authority and women as their subordinates. Women given the role of child-bearers and caretakers of the house and men as
bread earners working outside the home. These gender stereotypes are used for exploiting and discriminating against women.

Language is one of the most powerful means through which sexism and gender discrimination are perpetrated and reproduced. The verbal and written communication we practice is regularly used to oppress and degrade women. Almost every language is biased towards men and is filled with rules, words, proverbs and sayings which marginalize women.
Grammar rules like the generic use of the masculine gender (he/his/him)
whenever a singular referent is required and gender of the person is not revealed, naming of women by the masculine term of her profession, for example, businessman, chairman, policeman etc. Women addressed as Ms/ Miss/ Mrs according to their marital status but men are addressed as Mr according to their sex. The use of unnecessary gender markers such as male nurse because the job of nurse is always associated with a women. As the opposite of it, gender markers such as ‘female drivers’ because of the common notion ‘ women can’t drive’ .
Men are often associated with ‘Handsome studs’ having too many partners but women are referred to ‘bitches’ or ‘ sluts’ for the same. Men are called ‘ eligible bachelor’ even if they do not marry for a long time but women are called ‘ spinsters’ implicating that they have passed the common age of marrying.
There are proverbs and sayings that are carrying the tradition of misogyny. For example, there is a famous Italian proverb “ A woman who loves to be at the window is like a bunch of grapes on the wayside” which means women that women who sit on the window are willingly drawing attention to themselves, specifically male attention and it is as easy as grapes for a man to approach those women and even get her.
In Hindi, there is a proverb that translates to ‘ drums, animals, uncultured men, Shudras and women deserve to be beaten’. Not only this proverb promotes violence against women but it is also casteist and implies that a women is not perceived as an independent identity but man’s possession.
Swear words that we use are clear cut example of gender bias in our society. Most of the swear words are based on female genitals or their character. Even while attacking men, people comment on their mother, daughter or sister especially in India. ‘Son of a bitch’ means that the person’s father is uncertain and indirectly comment on their mother’s character. Each of these swear words refer to women’s character or women’s sexuality. There are phrases like ‘ crying like a girl ‘ or ‘ grow some balls’ or ‘ don’t throw like a girl’ which is often used to insult men but they also normalize the stereotypes like women are emotionally and physically weak and are not capable of playing and understanding sports.
Pop culture and media has left no stone unturned to endorse sexism in our mindsets. From our movies to songs to news channels and late night comedy shows, it is all-pervasive. Movies and books are infamous for objectification and sexual depiction of women reducing them to a mere commodity. Famous dialogues in movies like Kabir Singh (2019) and Dabbang ( 2010) are known for encouraging violence against women. Lyrics like ‘I’m in love with the shape of you’ and ‘I like big butts and I cannot lie, you other brothers can’t deny’ are included in songs which are chartbuster. News channels reporting violence against women which blames the victim.

Journalists, politicians, businesswomen and actresses, receiving comments on social media based on their appearances or constant questions about their relationships and marriage plans rather than their work.
Language and communication make people visible or invisible and recognize or demean their contributions to society. Our language shapes our thoughts and the way we think influences our actions. Sexism in language, media and everyday conversation normalizes gender stereotypes and give the impression that men are the keepers of knowledge and power and women are objects and it is acceptable to comment on their appearances online and in real life.
Online sexism pushes women out of online spaces. Language has been used as a medium to resist discrimination and patriarchy but using gender-fair language can lead to reduce gender bias in language and promote gender equality.