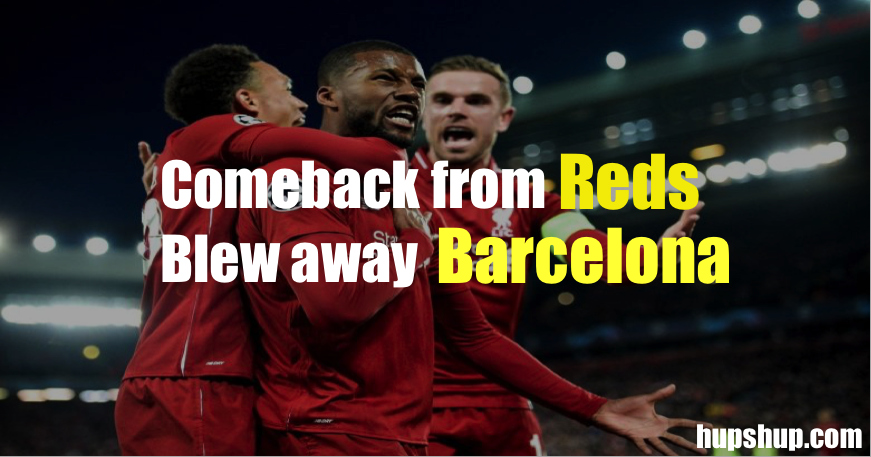 Georginio Wijnaldum scored twice in quick succession for Liverpool to give an equalizer with Barcelona on aggregate.

A nail-biting fixture for Liverpool fans on Tuesday night ends it in a 4-0 win at Anfield which results in 4-3 comeback on aggregate and Jurgen Klopp’s side march past Barcelona in this thrilling contest. Throughout 90 minutes Liverpool fans were ecstatic and delirious holding one another shoulders and singing their anthem “You Will Never Walk Alone”. After looking at this atmosphere it was hard to believe so much of positive vibes around but having faith in their club paid them off.

In the initial minutes, Jordan Henderson’s shot saved by Barcelona Goalkeeper Marc-Andre ter Stegen and from rebound Divock Origi came from behind to score the first goal in 7th minute giving little hopes to the fans.

Later, in the second half in the 54th minute, a little mistake from Alba allowed the ball went through to Wijnaldum and he took the chance perfectly and put the ball behind the net. Immediately in a quick succession Gini Wijnaldum dispatch a brilliant header into the top corner from a lovely cross from Shaqiri giving Ter Stegen no time to react in the 56th minute. At this moment fans and bench went crazy and it was difficult to believe but the crowd didn’t know that the best moment is yet to come; as in the 79th minute, it came when Origi scores; the whole stadium and commentators went delirious. The man behind this baffling goal was Alexander-Arnold whose brilliant thinking made him take a quick corner that caught Barca’s defenders in utter confusion but the understanding between those two played a part and Origi sends the ball behind keeper in the one-touch finish.

Moreover, this is not the first comeback Liverpool have ever made in Europe’s elite club tournament; their most famous and recent comeback was in 2005 Champions League final against AC Milan in Istanbul where they came from behind in second half to score three goals to destroy Ac Milan’s 3-0 lead and winning the final on penalties. Also in 2016 Europa League semi-final against Borussia Dortmund, they made a comeback; that game

also, they played under Jurgen Klopp. However, by their gameplay, will power and presence of mind it is clear that this Liverpool side under Jurgen Klopp has something special. So, can we expect another champions league crown this season?