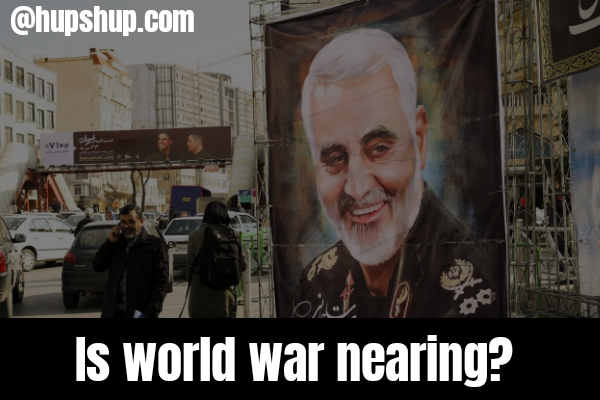 On 3rd January 2020, General Qassim Sulemaini of Iran was killed by U.S. in a drone strike which was approved by U.S. President Donald Trump. He was killed in Baghdad, Iran. Sulemaini was the military general and Iran’s most powerful commander. The American military unsuccessfully tried to kill another senior Iranian military official in Yemen, on the same day the drone strike killed Major. General Quassim Sulemaini. The disclosure of the second mission indicated that trump had further plans than was previously known. It intended to cripple Iran’s ability to carry out proxy wars in other countries. After Iran’s retaliatory missiles over Iraq, which hosts American base, both Trehan and Trump have kept calm.

The U.S. government has a long-known history of attacking resourceful states in order to take control over its resources. This isn’t the first time that U.S. has taken such an action.In 2003, U.S. barged into Iraq and President W. Bush government was in full momentum towards Iraq aimed at destroying WMD (weapons of mass destruction) that never existed, also to fight Saddam Hussein’s growing terrorism. The U.S. and its allies bombed Iraq for 21 days. The invasion was preceded by an airstrike on the Presidential palace in Baghdad on 20th March 2003. This move was highly criticized all over the world. People all over the world protested against this escalated action. On 2nd August 2004, President Bush stated “Knowing what I know today, we still would have gone on into Iraq. The decision I made is the right decision. The world is better off without Saddam Hussein in power.”

Political analysts have stated that the prime motive of the Iraq invasion was to capture the oil resources of Iraq. Iraq was one of the highest oils producing nation. America’s hegemonic nature has played a major role in the world politics. U.S. has taken every step possible to take control over the world. The entire world has been divided into different command zones by the U.S. military. Several military bases have been established all across the world.America has exercised power in ways that are unacceptable by the United Nations norms. Two major questions about US hegemony are fundamental today- one, does the maintenance of hegemony continue to serve American interests; and two, is US hegemony in decline? With the evolving of other centres of power, is US as a world hegemon at stake?

Germany and Russia are all set to fight and win the speculated world war. Germany is once again a military power. It is the fourth largest weapons exporter of the world. Like most nations that sell weapons, Germany is more than just making profits. It is building military alliances. Germany is arming Arab nations to undermine the power of Islamic republic of Iran. Recently Russia sent an 11-ship carrier group to the Mediterranean Sea, and Israel warns of war on “all fronts”.

The world is not ready for another war. World economies have taken a hit and a war will not spare any nation. Most of the powerful nations have acquisition of nuclear power and once war sets in action; they will not refrain from using it. World war 3 might result in a nuclear holocaust. The need of the hour is to work on creating better diplomatic relations and spare humanity another war that will destroy the human race.