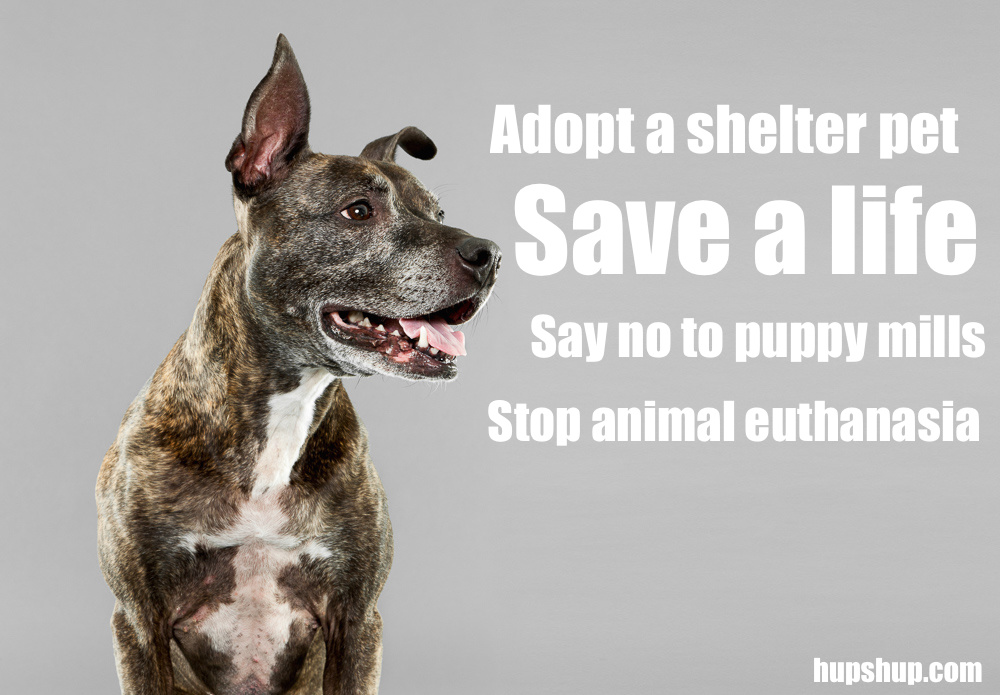 If you are thinking of adding a pet to your family here are a handful reasons that might encourage you to adopt your new best friend. Well here’s a quick heads up to what you’ll be reading ahead. I’ll be talking about how the animals which aren’t adopted are euthanized, how adoption is a win-win i.e. it can be good for you and the animal as well and lastly I’ll tell you how what we see affects our intellect and how we make wrong decision. Well if you are someone who wants a pet for the sole reason of showing off to the world on your Facebook and Instagram walls that you have a love for animals and “you care” you might save yourself the trouble of reading my article.

1. Because you’ll save a life At PETA’s shelter, most animals are put down. PETA calls them mercy killings. In 2014, according to its own records, it took in 3,017 animals. Of those, PETA euthanized 2,455 which is 81 percent. In some prior years, that rate has risen above 90 percent. Animals taken in shelter are taken care of until adoption, but in case they do not get adopted and fall sick they are euthanized. Well there are a lot of takes by all sorts of people out there and I for one don’t want to get into the morality of it. The reason why I talked about is that if you really want to have a pet you should adopt, doing so you would actually save a life.

2. Because you’ll get a great animal Animal shelters and rescue groups are brimming with happy, healthy pets just waiting for someone to take them home. Most shelter pets wound up there because of a human problem like a move or a divorce, not because the animals did anything wrong. Many are already house-trained and used to living with families.

3. Because it’s one way to fight puppy mills

If you buy a dog from a pet store, online seller or flea market, you’re almost certainly getting a dog from a puppy mill.
Puppy mills are factory-style breeding facilities that put profit above the welfare of dogs. Animals from puppy mills are housed in shockingly poor conditions with improper medical care, and are often very sick and behaviorally troubled as a result. The moms of these puppies are kept in cages to be bred over and over for years, without human companionship and with little hope of ever joining a family. And after they’re no longer profitable, breeding dogs are simply discarded—either killed, abandoned or sold at auction. These puppy mills continue to stay in business through deceptive tactics — their customers are unsuspecting consumers who shop in pet stores, over the Internet or through classified ads. Puppy mills will continue to operate until people stop supporting them. By adopting a pet, you can be certain you aren’t giving them a dime.

4. Because your home will thank you

Many of the pets from shelters and rescues are already house-trained, which means you’re not only saving a pet’s life, you may be saving your rug. Adopting a mature pet not only gives older animals a second chance, it often means introducing them to your family will be much easier.
Because all pets are good for your health, but adoptees offer an extra boost.
Not only do animals give you unconditional love, but also they have been shown to be psychologically, emotionally and physically beneficial to their companions. Caring for a pet can provide a sense of purpose and fulfillment and lessen feelings of loneliness. And when you adopt, you can also feel proud about helping an animal in need!

5. Because adoption helps more than just one animal

Overburdened shelters take in millions of stray, abused and lost animals every year, and by adopting an animal, you’re making room for others. Not only are you giving more animals a second chance, but also the cost of your adoption goes directly towards helping those shelters better care for the animals they take in!
Because you’ll change a homeless animal’s whole world.
Not only you’ll get a new best friend out of this arrangement but also be able to give back to them. Seriously, could there be anything better than this?

New research has revealed nearly half of Indians, 44 per cent, consider a pet’s physical appearance when thinking of adopting. 19 per cent, admitted being able to take photos and selfies with their pets is important.

I would have to say that the extent an image obsessed society and social media has had a negative impact on the adoption of animals. In some cases pets become long-stay animals at the rescue centers, spending months awaiting adoption.

Part of the problem and one of the things we certainly see is that the choices people make around getting dogs and cats is very much driven by what they see on social media. For example, we have seen an influx of huskies over recent years because of Game of Thrones and Twilight. It is a concern because people are driven by impulse purchasing so will often get a dog or cat without knowing what that means in terms of looking after them for the rest of their lives and that’s why their pets end up in shelters.

Well one way ahead to encourage people to adopt instead of buying pets might be to share stories of people who have adopted. Its true that we humans tend to be attracted to things we see in movies and on social media, the idea of having the same lifestyle as they have seen on screen makes them pursue options like buying from shops and eventually encouraging puppy mills. Content creators should take in such stories where people adopt and that would surly help in reaching out to people’s minds. And as a reader we must encourage you to share this with the ones you know of who are looking for adding a pet to their family.

If you agree with what I have shared or want to add something to it do write down in the comments section below.

One thought on “Why not adopt? Save a life by taking the right decision.”

Mental Health amidst a Pandemic

A letter to the resident

For The Lover Of The Nation That Lives Abroad