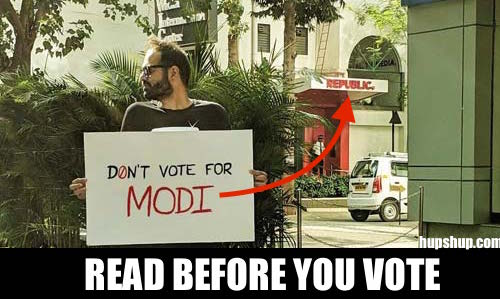 Comedy is an art, and any kind of art form should be given as much liberty to express, convey, speak, as much it demands, as much the artist requires.  But the democracy we live in sometimes restrict that. Sometimes the authority does not understand the autonomy of the set piece and tries to subjugates what is conveyed, by editing, banning, doctoring, and sometimes taking means that not only corrupt the sovereignty an artist must have, but also tries to establish its power by discouraging and demeaning anything that says of its faults.
Plenty of artists, mostly comedians, in recent past, have complained that they have been threatened by unknown phone calls, letters without any salutations, and even by their clients for not including jokes that would speak against the authority, the govt., the central ruling party, even in humor. The ongoing vogue of being offended by criticism  is spreading and only limiting the forms of art, and conveying the truth.

In 2015, a Youtube Channel, Being Indian, released a video called “I AM OFFENDED” which captured numerous comedians talking about the struggle for content and with censorship in this easily offended country.
The country that is so vague in its approaches in politics, in charity, in movements, had suddenly started to have a lot of problems with people joking about it, and the community of comics were only met with lesser opportunities, more censorship and less control and freedom over their material, and their format. The scripts had started to be reviewed by the managing team of the event, and thus, complied the artists to speak only what they approve. More and more artists have come forward and have addressed the issue. The BJP govt which is infamous about shutting up everyone that speaks in dissent of it, has been accused of sending out threat calls and letters to the artists.
In 2017, Kunal Kamra, who became viral with a video on JNU hazard and demonetization, did come forward to share his misery after he criticized the govt. in his viral video. He said to a source, that he is often cautioned and warned before shows for his critical views. In a weird, and shameful turn of his events, his landlord asked him to leave the house, since his comedy is a threat to their security. The comedian doesn’t shy away from sharing what has been done, and calling out the govt. for its misdeeds. His show on his YouTube channel “Shut Up Ya Kunal” is as honest, as real, as it gets.

From Kanhaiya Kumar to Sachin Pilot and Javed Akhtar have been on the show to discuss the demographic of today’s democracy and how criticism in not dealt rightly by the present govt.

In the time when a ruling party chooses a candidate that is accused with terror charges, and does more for a Mandir than for a farmer, I think it is we the people who need to know our vote and know our party. Akshay Kumar has interviewed our Prime Minister and has asked about his preferences about mangoes, but I say let’s not deviate from ours, let’s choose somebody who would actually be tolerant of criticism, participate in engaging with the public, and does not need interviews by celebrities, movies, and web series to prove his virtue.