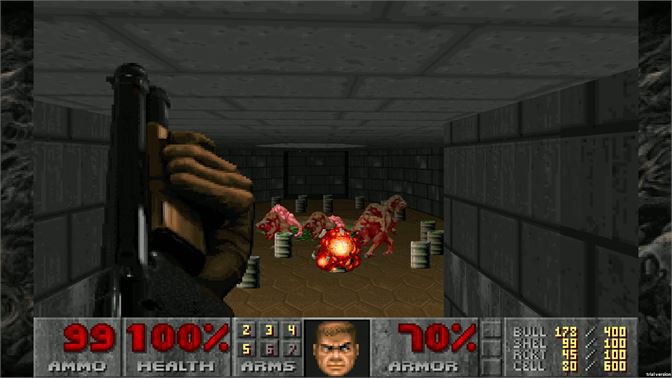 Doom is a video game released in 1993 for computers. It was a huge success for the then small company, id software, and is still considered by many to be the most influential, if not greatest, game of all time.

In terms of story there wasn’t much, you played as a space marine that fights demons. However, where it did stand out was in nearly every other department. From it’s soundtrack and graphics to its level design, many video game developers still look at doom as an inspiration.

For a game achieving success of this magnitude, there are bound to be publishers who wanted to have the rights to release the game in different home consoles, and that’s exactly what happened.

Over the years, Doom has been released in different versions over a dozen times and almost all of them have sold well. However, there is one console version that stands out. The name of the console was “3DO”.

The 3DO was a video game console released in 1993 was hyped up to be the most advanced gaming system at the time. It had an aggressive marketing campaign and was said to be one of the first CD based gaming systems(up until then, cartridges were the norm).

Due to it’s high price and many other issues(it’s failure is so spectacular that it deserves an article of its own), the 3DO didn’t sell very well. However, it’s intense marketing led an individual to invest a lot of money into getting a version of Doom on the 3DO. The name of the individual was Randy Scott, and this is where our story begins.

The video game industry was starting to boom in the early 90s. Although now there are only 3 major players in the video game console market, in the 90s many different companies had emerged with 3DO being one of them.

Naturally, many other people wanted to get into this booming business with Randy Scott being one of them. He noticed that the 3DO didn’t have a version of doom and wanted to publish one for it, so, he created a company called Art Data Interactive with the initial goal of publishing games for the 3DO.

Randy got the people at his church to invest in his company. The first thing he did was get a license from id software(makers of doom), to be able to legally make the game. The licensing fee(needed to legally develop the game, development costs were separate) he had to pay was allegedly between $250,000 to $500,000.

After getting the licensing rights, he went on a massive ad campaign to promote his newer version. He got full length ads in magazines, gave interviews and did his best to make sure every person knew about the new game.

FMV is telling the story of a game through videos, although it’s the norm currently, at the time it was pretty rare and expensive

Randy set a release date of Christmas 1996 and contacted a lone individual, Rebecca Heinemann, to take care of the final stages of development. She was told that “there was a version in existence with new levels, weapons and features and it only needed ‘polishing’ and optimization to hit the market.”

Making a game takes time. According to Rebecca, she needed around 6 months to do her job efficiently however she was only given 10 weeks, but since she was under the impression that she had to do the final stages of development which usually requires polishing and optimizing, she agreed.

On not receiving the “version in existence” several times, she finally drove to the office of Art Data Interactive and asked them for it. Rebecca was expecting the source code with the completed levels which she just had to optimize.

She was instead shown several pics and art of all the new weapons and enemies, the pics they were using for marketing, and was told to add them to the game.

Adding a new feature to a game, be it a weapon or a monster, involves drawing up the concept art, making a digital version of it, programming it, taking care of the sound effects etc. Its usually a lengthy and complicated process.

Randy Scott was under the impression that copy pasting images simply adds them to a game.

On realizing that her contractor had no knowledge regarding game development, she simply walked away from the project. It was only after interjection by the people at 3DO that she agreed to stay and complete.

Due to paucity of time, she simply ported over the original game without any new features and had it shipped. The game was slow, had bad graphics and was unplayable most of the time. It reviewed terribly and sold badly resulting in Randy having to leave the business for good.

Lessons to be learnt

It may seem highly desirable by any individual with access to a large sum of money, to invest into the “hot product” of their time. They may consider themselves having sufficient knowledge to delve into such projects, and enjoying all the attention they receive from the initial stages of the marketing but reality hits later on.

The truly sad part about this story is not the amount of money that was eventually lost, but rather the potential.

Doom on the 3DO did have one distinct feature than all the other versions and that was it’s soundtrack, which Randy himself composed with his band. The soundtrack on the 3DO is considered by many to be the best out of all the versions released yet and has received universal claim. Maybe if Randy had focused on the musical gift he had rather than pursuing the “trendy” thing of his time, he could have saved himself from all the mess that eventually happened.

Investing into any industry, no matter how big or small, is being a risk taker, but investing without having any knowledge, that’s just being stupid.